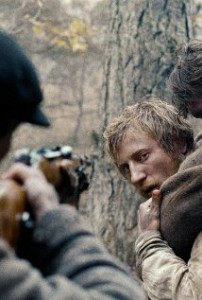 Summary: It is 1942, and on the German-occupied Western frontiers of the Soviet Union, local partisans are fighting a brutal resistance campaign. Two of these partisans are escorting suspected Nazi collaborator Sushenya to his death when they are ambushed, and wounded. The tables turned, Sushenya is forced to make a moral choice under immoral circumstances. Adapted from Vasil Bykov’s novel, In The Fog is minimalist and restrained, its sparse visual language and soundtrack driving the growing sense of menace and unease, and ultimately unfolding into a philosophical and psychological meditation on morality.

Dave Griffiths’s ‘In The Fog’ Review: Please check Dave’s review of ‘In The Fog’ that is available on the Helium Entertainment Channel.

Other Subculture Media Reviews of ‘In The Fog′: Check Episode #24 of our The Good The Bad The Ugly Podcast for a more in-depth review of ‘In The Fog’.