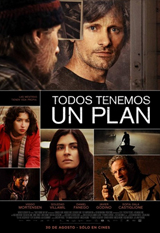 Summary: Agustin (Viggo Mortensen) is a married doctor secretly desperate to escape what he sees as a frustrating domestic existence in Buenos Aires. Facing pressure from his wife to accept life-changing decisions that he’s not fully committed to, the death of his twin brother (Mortensen) provides an opportunity to start anew. Adopting the identity of his shady brother and returning to a mysterious region of the Delta where they lived as boys, Agustin quickly recognises that the hoped-for simple life has been made complicated by his twin’s criminal connections.

SUBCULTURE MEDIA/THE GOOD THE BAD THE UGLY FILM SHOW REVIEWS/RATINGS OF ‘EVERYBODY HAS A PLAN’:

Please check Greg’s review of ‘Everybody Has A Plan’ that is available on www.filmreviews.net.au