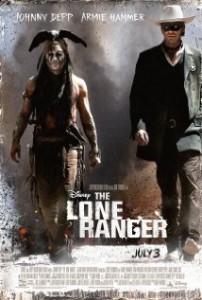 Disney have released some new television spots/ads for the release of ‘The Lone Ranger’. The film which stars Johnny Depp, Armie Hammer, Tom Wilkinson, William Fichtner, Barry Pepper, James Badge Dale, Ruth Wilson and Helena Bonham Carter and is directed by Gore Verbinski will be released in America on July 3. You can check out the TV spots/ads below: