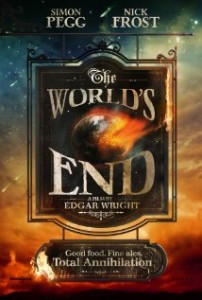 Get ready for a comedy invasion! Simon Pegg, Nick Frost and Director Edgar Wright will be in Australia this July to celebrate the release of their eagerly-awaited new film THE WORLD’S END – the final chapter in the ‘Three Flavours Cornetto’ trilogy, which includes 2004’s breakout hit SHAUN OF THE DEAD and 2007’s cop-comedy HOT FUZZ.

Fans will have the opportunity to see the trio when they walk the red carpet at the film’s Australian Premiere on Tuesday July 16 at Melbourne Central. Pegg, Frost and Wright will then visit Sydney on Wednesday July 17.

THE WORLD’S END centres on five childhood friends who reunite after 20 years in an attempt to complete an epic pub crawl and reach the fabled pub, The World’s End. But finishing the pub crawl becomes the least of their worries when they realise the real struggle is for survival, not just theirs but mankind’s. THE WORLD’S END also stars THE HOBBIT’s Martin Freeman and JACK REACHER’s leading lady Rosamund Pike.