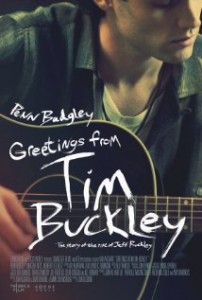 Summary: The legacy of Jeff Buckley has continued to resonate through music fans, even 19 years after his only album titled Grace was released. Following the story leading up to Jeff Buckley’s eminent performance at St Ann’s Church in 1991, GREETINGS FROM TIM BUCKLEY is the first feature film that explores the birth of the young musician’s talent.

Penn Badgley (TVs Gossip Girl) plays Jeff Buckley, in this heart-warming film that explores the birth of an extraordinarily gifted artist. Although he did not know his father Tim Buckley, his story reflects the same path as his fathers of finding fame in his respective time period.

When Jeff is asked to attend his father’s tribute concert in St. Ann’s Church, he is resentful of his father’s absence and success. Through a romance with Allie (Imogen Poots), Jeff learns to embrace his feelings towards his father and finds the courage to perform. It’s at this landmark concert that Jeff Buckley discovers his own voice, which helps him launch a career, as one of the greatest musicians of his time.

Other Subculture Media Reviews of ‘Greetings From Tim Buckley′: Please check Episode #43 of The Good The Bad The Ugly Film Show for more reviews of ‘Man Of Steel’.