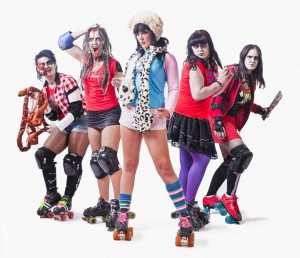 Strongman Pictures Entertainment and Monster Pictures have announced the release of a new teaser video for the roller derby exploitation slasher flick, MurderDrome. The video coincides with the announcement that MurderDrome will have it’s premiere at Monster Fest in November this year and can be viewed below.

MurderDrome is distributed by Monster Pictures in Australia, New Zealand, the UK and Ireland. The producers will seek to seal further deals for territories throughout the rest of the world at the American Film Market later this year.About MurderDrome
Roller derby dames take on supernatural evil.
Cherry Skye just wants to skate, but the vengeful ghost of a killer has plans for her soul. Trapped between the wrath of love scorned and supernatural evil, Skye races towards The MurderDrome at breakneck speed. When she gets there there’s no guarantees anyone is coming out alive. Welcome to TheMurderDrome, it’s not a game anymore…

About Monster Pictures
Monster Pictures is a Melbourne based distribution and production company that is dedicated to delivering the most energetic, unique, creative, innovative, provocative, bizarre, frightening, challenging, surreal, offbeat, absurd, twisted, demented, raunchy, cinema in the world today – the weirder, the wilder, the blacker, the sexier, the crazier, the dirtier, the funnier, the better.

More about Monster Pictures can be found at www.monsterpictures.com.au.