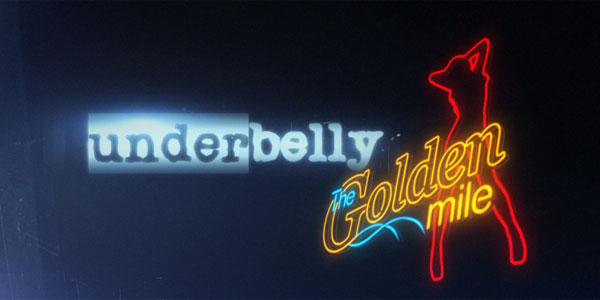 For this week only, the opportunity exists to acquire a rare piece of television memorabilia from the iconic UNDERBELLY television franchise, along with the latest series from the show’s producers, FAT TONY & CO.
Production company Screentime has released for auction 14 unique Neon Signs that were designed and crafted for UNDERBELLY: THE GOLDEN MILE (2010), UNDERBELLY BADNESS (2012) and their most recent, stand-alone production FAT TONY & CO (2014).  These Neon Signs are one-off designs – there are no duplicates – and each featured throughout their respective shows, cementing their place in Australian television history.
And as proof of authenticity and to provide evidence of ‘provenance’,  each Neon Sign will be sold with a Certificate, signed by Paddy Reardon, who served as Production Designer on all three shows.
The Neon Signs are currently available for purchase via Grays Online until closing bid on Sunday 24 November at 6.30pm, AEDT.  Pictures and dimensions can be viewed via the following online bidding link:
http://www.graysonline.com/sale/3004337/memorabilia/authentic-underbelly-memorabilia-neon-signs
Personal inspection of the Neon Signs can be made as follows:
WHEN:
Friday 22 November 2013 between 9.00am and 4.00pm
LOCATION:
275 Williamstown Road, Port Melbourne, Victoria
So whether you are a serious collector of entertainment memorabilia or just wishing to obtain a fascinating and functioning decorative object that will be a ‘talking point’ in your home, this is your chance.
Tagged: Fat Tony & Co, Paddy Reardon, Udnerbelly Memborilia, Underbelly, Underbelly Badness, Underbelly: The Golden Mile