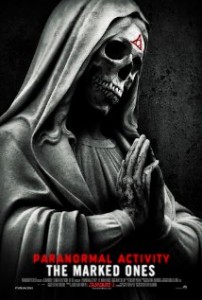 Summary: After being marked, Jesse begins to be pursued by mysterious forces while his family and friends try to save him.

OUR PARANORMAL ACTIVITY: THE MARKED ONES REVIEWS & RATINGS:

Please check Greg’s Paranormal Activity: The Marked Ones review of that is available on www.filmreviews.net.au

Please check Nick’s Paranormal Activity: The Marked Ones review of that is available on The Good The Bad The Ugly Film Show Ep #65

There has been a death knell for the “Paranormal Activity” franchise ever since the last film ended with what appeared to be a zombie apocalypse. The first film worked because of how natural the ‘found-footage’ seemed, the whole idea of a zombie apocalypse coming from that original film was completely far-fetched. Well it seems that the death bells have well and truly rung now because “Paranormal Activity: The Marked Ones” has so far been the lowest grossing film in the franchise. Now that is actually a bit of a pity because this film is better than some of the recent outings in this franchise, even though most of the characters this time around are newbies.

The film opens with Jesse (Andrew Jacobs – who is almost a dead ringer for Taylor Lautner) celebrating the fact that he is graduating from High School. However the celebrations are soon put on hold when his friend Hector (Jorge Diaz), his sister Marisol (Gabrielle Walsh) and Grandmother (Renee Victor) realise that there is something strange going on in their neighbour Anna’s (Gloria Sandoval) apartment.

With the group at a loss of what is happening their curiously is peaked even higher when Anna is murdered by one of Jesse’s former classmates Oscar Hernandez (Carlos Pratts). After deciding to investigate the crime scene themselves some strange things start happening to Jesse and the supernatural goodness begins.

Director/screenwriter Christopher Landon (who has been with the “Paranormal Activity” franchise since film number two) seems to be on track with “Paranormal Activity: The Marked Ones.” The films characters are likable, even though along the way they break some of the most basic horror film rules, and Landon has once again brought a natural feel to the franchise… something that seems to have been missing since the franchise’s early days.

One thing that does seem to be missing from this film though are any real scares or frights. While the film promises to be a cinematic nasty it is anything but. The supposed scares in the film will make your average teeny-bopper jump but will have no effect at all on seasoned horror fans. No Landon has instead decided to make “Paranormal Activity: The Marked Ones” a horror film for the popcorn masses rather than for people that would have relished the moments while they were watching “You’re Next” last year.

The fact that the film doesn’t contain any real frights is made even worse when you realise that what Landon has created here is the basis for a good horror film. But when the last quarter of the film feels like you are watching an episode of The Shield rather than a horror film that becomes a real problem. Even the ending of this film creates some issues because it really does feel like it was only tacked on to make this film part of the Paranormal Activity franchise… perhaps it would have better to have just been a standalone horror film called The Marked Ones.

One thing that Paranormal Activity: The Marked Ones does need credit for the fact that the actors all feel really natural, not an easy feat for young actors to achieve. Andrew Jacobs really announces himself as a young star to watch in the future while he is well supported by Gabrielle Walsh and Jorge Diaz who simply just do what is asked for them. Renee Victor also seems to enjoy playing Jesse’s grandmother and at times she is an absolute gem on the screen.

While Paranormal Activity: The Marked Ones does have all the marks of a good horror film it lets itself down with an ending that only seems to be there in order to tie it into the franchise.