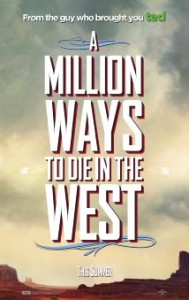 Seth MacFarlane is back and this time he is taking on the wild west. The A Million Ways To Die In The West trailer has just been released. The film stars Seth MacFarlane, Charlize Theron, Amanda Seyfried, Neil Patrick Harris, Giovanni Ribisi, Sarah Silverman and Liam Neeson and will be released on the 30th May, 2014.