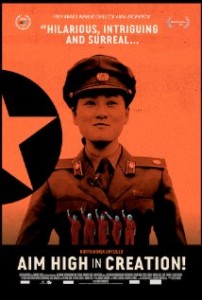 Summary: Determined to stop a new gas mine near her Sydney home, director Anna Broinowski (Forbidden Lie$) goes to North Korea to learn from the masters of propaganda cinema. In a worldwide first, Pyongyang’s top directors, composers and movie stars take her to script rehearsals, Taekwondo stunt fights, group dances, drunken picnics, and a film shoot on a real-life captured US spy ship – to teach her Kim Jong Il’s techniques. Back in Sydney, Anna’s fearless cast follow the North Koreans’ instructions to produce a didactic socialist melodrama, full of song and kick-ass fights, in which “heroic workers” rise up to defeat the “evil, gas-fracking miners.” Through the shared love of cinema, AIM HIGH! forges an astonishing new bond – between North Korea’s hidden filmmakers, and their collaborators in the Free World. Revealing an unexpected truth about the most isolated nation on earth: Filmmakers, no matter where they live – are family.

You can check out Greg’s The Raid 2 review on www.filmreviews.net.au

There have been a number of documentaries made over the years that explores the problems associated with ‘fracking.’ The leader in that pack of documentaries was the magnificent Gasland that not only shows the environmental impact that fracking causes but also the major health problems caused by people who sadly live near the sites where this practice is being conducted.

Now comes Aim High In Creation a docco put together by Anna Broinowski who decides to tell the world about the fact that fracking will soon be conducted in some residential parks in the New South Wales captiol of Sydney. Anyone who has seen what fracking can do will quickly realise that this is a time bomb waiting to happen, so really Aim High In Creation should have been a powerful documentary that Broinowski could use to educate the people of Australia about what was to happen. Sadly though Broinowski seems to lose her way a little and the film never really gets its message across as powerfully as it should have done.

There are moments where Broinowski does deliver some powerful scenes of the environmental damage and health issues that fracking have called to Australians over the years but then when she realises the best way to get her message across is to follow the style of the North Korean propaganda films that have been pumped out of the country over the past few decades.

Broinowski’s idea does seem like a good one… on the surface. Sure the idea of cramming in information about fracking as well as showing what life is like for those living under the conditions of the North Korean regime might make the docco a little heavy. That doesn’t happen though because somewhere along the way Broinowski almost seems like she becomes a ‘groupie’ of the North Korean film industry and almost forgets about what the docco was meant to be about in the first place.

Getting acsess to being able to film in North Korea could have allowed Broinowski to have made a strong comment on the countries style of propaganda filmmaking and the dangers associated with it. Instead Broinowski seems to champion the way the North Koreans make their films, so much so that they are soon asking to her appear in one of their films. While the information shared about the North Korean film industry is interesting to cinema lovers it does seem to steer Aim High In Creation well and truly away from the topic it was supposed to be looking at – fracking.

Broinowski and her cast of actors, known names such as Peter O’Brien and Matt Zeremes, that she plans on using in her fracking short film spend a lot of time trying to capture the North Korean way of doing things, but watching them do so at times does lead to the audience losing interest in the film, especially when it seems like it just can’t stay on topic.

Somebody needs to make a serious film about the dangers of fracking in Australia but sadly Aim High In Creation just isn’t that documentary. Broinowski tries to use creative license to get her point across but this vanity piece seems to lose its way so much that in the end it just doesn’t end up getting many points across at all.