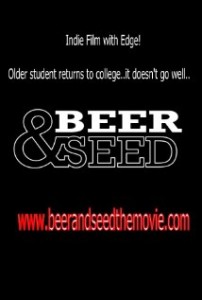 Summary: A Navy Veteran decides to return to college in a bid to graduate.

It’s strange just how many people decide to give independent cinema a wide berth. It’s a shame that they have that kind of belief because the indie cinema genre has provided the film world with some outstanding talents over the years. The likes of Jim Stamatakos and Bill Mousoulis have certainly shown just how talented they are over the years and now comes director Seth Comway who has delivered the very interesting Beer & Seed.

The film itself is centred around Bill Cook (played by Bill Cox), a Navy veteran who decides to head back to college not only to gain an education, but to also hangout with twenty year olds and do ‘the things that he didn’t do when he was twenty years old.’

The college journey sees Bill suddenly thrust into an interesting world that causes him to mix with the likes of a seasoned drug dealer named Seed (Andrew Peacock), a rookie drug dealer who sponges off Seed, Steve (Ryan Endicott Sawyer) and Steve’s girlfriend Sue (Christine Tran), a smart girl who is only attending the college in question because she wants to have a fun time. Then there is also Jimmy ‘The Nail’ (Roger Palomino) a Doogie Howser like student who has finished High School early but now just wants to be involved in the seedier part of the college.

After a particular violent incident involving Bill and Steve, Bill suddenly seems to find himself almost permanently in the company of staff members Dean Morris (Dan Lewis), Graduate Assistant Grady (Tom Combs) and Professor Jons (Jon Sick). All Bill wants to do is graduate but it now seems that no matter whether Bill is at school or at work these three turn up and make things hard for him.

Part of the charm of Beer & Seed is that the audience never really knows where the film is going to go next. Cox has written this film in such a way that one moment that film seems to want to go down the American Pie or Community style comedy path while it often threatens to become a Gran Torino or Harry Brown style story where Bill might be asked to start cleaning up some of the dirtier sides of the school.

What holds the film together however is that you really want to see what happens to the characters at hand. Bill is a likable character, yes he finds himself in some situations that are a little sticky, but despite that you want to see whether or not he actually achieves the goal that he has set out for himself and that is to graduate. Then there is also the menace of characters like Jimmy ‘The Nail’ and Seed. Seed it feels at times may boil over while the extreme dreams of Jimmy wanting to be a bad-ass makes him a violent cocktail that could explode at any moment.

Under the laughs though it also feels like Cox is trying to make a social comment on American college, and perhaps even High School, culture. For most of the film the college’s staff seem incompetent at their jobs and never seem to piece together anything that would point to the fact that there is a drug dealing ring in the school. No they seem more preoccupied giving Bill a hard time because he is struggling with drafting then what they are to go after the drug dealers or even the wannabe rapist/pimp that are lurking in the hallways.

When it comes to the cast Bill Cox brings an endearing Chevy Chase feel to his role. He’s a likeable actor who doesn’t have to work too hard to deliver either a dramatic scene or a laugh when the script calls for it. The standout actor here though is Andrew Peacock who brings an interesting feel to the character of Seed. He too is likable but you are never sure where the character is going to go if he is pushed to the limit. Looking like a young Robert Trujillo, Andrew Peacock is someone that you really feel does have a future ahead of him as an actor.

If you love your indie cinema Beer + Seed is well worth a look as it doesn’t allow its minimal budget to hold it back. The film genre switches with complete ease and the inclusion of the animated ‘Fat Chicks’ sequence will make it the kind of film that people who loved Jonas Akerlund’s Spun will quickly find themselves engrossed off. Indie is not a bad word and Beer + Seed proves that.