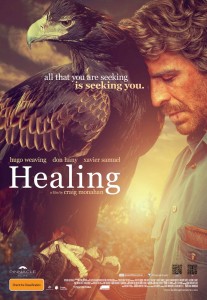 Healing is a powerful, moving story of redemption, the discovery of hope and the healing of the spirit – in the most unlikely place, for the most unique men, through the most unusual catalyst.

Don Hany (The Broken Shore, Serangoon Road, East West 101, Offspring) makes his feature film leading role debut as Viktor Khadem, a man who has almost given up on life after 18 years inside. Near the end of his sentence he is sent to Won Wron, a low-security prison farm 200 km outside Melbourne in regional Victoria, where Senior Case Worker Matt Perry (Hugo Weaving) has established a unique program to rehabilitate broken men through giving them the responsibility for the rehabilitation of injured raptors – beautiful, fearsome proud eagles, falcons and owls.

Against all odds, Matt takes on Viktor as his number one test case, introducing him to Yasmine, the majestic Wedge-tailed Eagle with a two metre wingspan. If these two can tame each other, anything is possible.