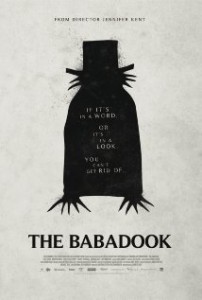 Summary: “Do you want to die?” seven-year-old Samuel asks his stressed-out single mother, Amelia. She wonders if his question is a threat or a warning. After dealing with Samuel’s frantic tantrums his entire life, Amelia suspects that her son has begun directing his violent misbehavior toward her. However, after a dark and foreboding children’s book called Mister Babadook mysteriously appears on Samuel’s bookshelf, Amelia must decide if her son is truly deranged, or if there really is a bogeyman lurking in their darkened halls at night.

OUR THE BABADOOK REVIEWS & RATINGS:

Greg King: You can check out Greg’s The Babadook review on www.filmreviews,net.au

Australia has always been a country known for its cult horror. Whether it be the older Oz-ploitation films like Fair Game that inspired a young Quentin Tarantino or more modern films like Storm Warning, it seems Aussies know their horror. Need further proof? Well the filmmakers behind the original Saw series… also from the land down under. Now comes the latest Aussie horror flick, the low budget The Babdook and once again the Aussies have got it 100% right.

The flick follows hard working widow Amelia (Essie Davis – Burning Man, TV’S The Slap) who tries all she can do to be a good mother to her awkward son Samuel (Noah Wiseman – The Gift). However, things are not always easy for her and as her son’s behaviour seems to push more and more people away things become increasingly worse for them.

Things then turn even more serious when a children’s book mysteriously turns up in the house. After reading the book once to Samuel Amelia realises how dark and disturbing it is. However no matter how she tries to get rid of it the book keeps returning and even worse still is the fact that the horror it speaks about, Mr. Babadook (Tim Purcell – newcomer) now haunts their home in a potentially deadly manner.

Some people may look at the low budget of The Babadook and decide to give it a wide berth but doing so will mean they miss out on one of the best horror films to surface this year. This is a film that really announces Jennifer Kent as a director to watch. Kent has grown up living and breathing horror films her whole life and it certainly shows here. This is clearly the best ‘creepy kid’ horror since Let The Right One In and it blows most of the blockbuster horrors we’ve seen in recent years right out of the water.

Kent knows that it takes more than just a creepy soundtrack and some ‘bumps and screams’ on the audio track to really frighten an audience. Here she combines so good old fashioned psychological terror with one of the creepier characters we’ve seen in the horror genre over recent years. While his name might sound like something out of a Lewis Carroll adventure the Babadook himself is a pretty good horror nasty. The fact that he isn’t afraid to attack children or maim and torture a mother shows that he means business. He along with the suspense of not knowing if any of the characters in the film are suffering from mental means the audience is often on the edge of their or jumping out of them… the two things they should be doing during a horror film.

As a director Kent also gets the best of her cast. She puts both Essie Davis and Noah Wiseman through the ringer throughout this film. Davis has been a star-on-the-rise for awhile now and this really confirms that she is among the most talented actresses in Australia at the moment while Wiseman shows that he is a child actor with a big future ahead of him. For him to constantly deliver on the screen when he is playing a gruelling role and is on screen for nearly every minute of the film really shows just how talented he is.

If you are a horror fan then you won’t want to miss The Babadook. Once again an Australian filmmaker delivers a horror film that is destined to become a cult classic.

Other Subculture Media Reviews of ‘The Babadook′: For our full The Babadook review please check The Good The Bad The Ugly Film Show Ep #80