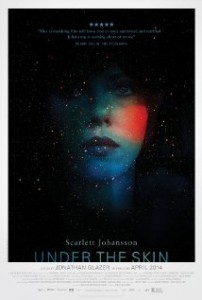 Summary: On Scotland’s lonely back roads, a beautiful woman (Johansson) stalks unwitting men. Her identity and her motives unclear, she is simply, and quite literally, a sexual threat.

OUR UNDER THE SKIN REVIEWS & RATINGS:

Adam Ross: You can check out Adam’s Under The Skin review on The Good The Bad The Ugly Film Show Ep #81

Greg King: You can check out Greg’s Under The Skin review on The Good The Bad The Ugly Film Show Ep #81

Nick Gardener: You can check out Nick’s Under The Skin review on The Good The Bad The Ugly Film Show Ep #81

To me Under The Skin is an exceptional film that deserves to be considered among one of the best films of 2014, on the other hand I can completely understand how some people could sit down and watch this film and declare ‘I hated that.’ See Under The Skin isn’t your typical sci-fi film, it’s not the kind of film that people who flock to see latest Avengers movie and then swear they love the genre are going to be calling a classic. The film actually seems like its director Jonathan Glazer (Birth, Sexy Beast) has deliberately made a film that he wanted to be a cult classic. But who are we to complain when he has created a cult classic so well put together.

The film bizarrely follows Laura (Scarlett Johansson – Captain America: The Winter Solider, Her) an alien who has taken the form of a young woman and now drives around Scotland luring men to their deaths like the sirens of old. Why she does it or anything about the ‘alien mission’ is never explained and explored as Glazer seems to want his audience to be asking more questions than are ever answered in the screenplay.

Some might criticise Under The Skin for its lack of plot, but it is actually one of the things that makes this film so special. While not everything is explored thoroughly there are harrowing moments throughout this film and no lack of suspense. The fact that you don’t know why Laura is doing what she is doing doesn’t make watching her leave a child to die on a cold beach any less harrowing or it less suspenseful when she is trying to lure a man to his death that seems to have lived a hard life and does not deserve such an ending.

Glazer does make some brave choices with this film. A lot of the ‘victims’ in the film are not actors and are instead members of the public. The van in which Johansson drove around in was hooked up with cameras and Glazer shot countless hours of footage as she seduced men into it, which only enhances the natural feel that seems to surround the film throughout.

It’s things like that which make Under The Skin such a unique film. But Glazer goes above and beyond that with some amazing visuals that lift this film into the ‘masterpiece’ category. Its brilliant soundtrack and eerie shot selections adds to the film’s atmosphere and makes every single part of it have a threatening presence that is rarely brought to the big screen anymore.

While Glazer really shows himself as an important filmmaker with Under The Skin the film also reminds the audience just what a fine actress Scarlett Johansson is. She really is one of the most diverse actresses in modern cinema, moving smoothly from lighting up the screen in blockbusters such as The Avengers while mixing it with some brilliant performances in arthouse films like Her and Chef. To put her performance here into context though, this is perhaps one of her finest performances, a role where she is tested to the absolute extremes but delivers one of the performances of the year.

Under The Skin is going to be one of those films that cinemaphiles talk about alongside Fight Club and Donnie Darko… a film that if you haven’t seen then you can’t expect to be classed as a serious movie fan.

Other Subculture Media Reviews of ‘Under The Skin′: For our full Under The Skin review please check The Good The Bad The Ugly Film Show Ep #81