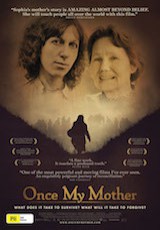 Summary: When Australian filmmaker Sophia Turkiewicz (Silver City) was seven years old, her Polish mother, Helen, abandoned her in an Adelaide orphanage. Sophia never forgot this maternal act of betrayal. Now in middle age, and with her mother in her twilight years, Sophia begins to examine her troubled relationship with Helen.

She discovers the miraculous story of Helen’s life – an orphaned childhood on the streets of Poland, a wartime escape from a Siberian gulag and an enforced march of thousands of kilometres across a war-torn Eastern Europe to the shores of the Caspian Sea in Persia, before finding a peace of sorts in refugee camps first in Africa and then Australia. With Helen sliding into dementia, Sophia must confront her own demons. Did she ever truly know this woman who became her mother? Does she have it in her heart to forgive her for her abandonment? And is it too late?

OUR ONCE MY MOTHER REVIEWS & RATINGS:

Greg King: You can check out Greg’s Once My Mother review on www.filmreviews.net.au

Other Subculture Entertainment Reviews of ‘Once My Mother′: For our full Once My Mother review please check The Good The Bad The Ugly Film Show Ep #89.