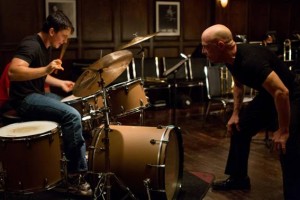 Well Whiplash was one of the films that everybody was talking about after Sundance(after walking away with both the Grand Jury and Audience prizes) this year so it is no surprise that Sony have quickly decided to let everyone know what it is all about. They released the following information today:

Andrew Neyman (Miles Teller) is an ambitious young jazz drummer, single-minded in his pursuit to rise to the top of his elite east coast music conservatory. Plagued by the failed writing career of his father (Paul Reiser), Andrew hungers day and night to become one of the greats. Terence Fletcher (J.K. Simmons), an instructor equally known for his teaching talents as for his terrifying methods, leads the top jazz ensemble in the school. Fletcher discovers Andrew and transfers the aspiring drummer into his band, forever changing the young man’s life. Andrew’s passion to achieve perfection quickly spirals into obsession, as his ruthless teacher continues to push him to the brink of both his ability—and his sanity.

Written and Directed by: Damien Chazelle

They also released the Whiplash trailer.