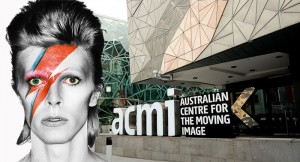 A documentary film of the Australian Centre for the Moving Image’s (ACMI) forthcoming Melbourne Winter Masterpieces exhibition, David Bowie is, is set to premiere in Australia. The cinema experience of the record-breaking UK exhibition will show at ACMI in its Australian premiere on Friday 7 November 2014.

Commissioned by the Victoria and Albert Museum (V&A), London, the documentary was filmed in the museum on the final night of the world premiere season of David Bowie is, which went on to become of the V&A’s most popular exhibitions.

The camera takes the audience on an extraordinary journey through the David Bowie is exhibition with special guests including legendary Japanese fashion designer Kansai Yamamoto, Pulp front-man Jarvis Cocker, and other collaborators, to explore the stories behind some of the key objects and moving image that document Bowie’s artistic career. The exhibition’s curators, Victoria Broackes and Geoffrey Marsh, provide fascinating insight into Bowie’s defining career moments via memorable music videos and original costumes, as well as giving context to some more personal items such as never-before-seen handwritten lyrics, album cover artwork, set designs and diary entries, which reveal the creativity and evolution of Bowie’s ideas.

Directed by Hamish Hamilton, the BAFTA-winning director of the Academy Awards® and the Opening Ceremony of the London 2012 Olympic Games, the documentary had its premiere in London in 2013 and will screen across the United States in September.

The fastest selling exhibition in the V&A’s history, David Bowie is is now on a global tour, having already travelled to Toronto, Sao Paulo, and Berlin to international acclaim.

This unique cinema event will give Australian audiences a sneak peek into the groundbreaking exhibition ahead of its opening at ACMI in July 2015 as part of Melbourne Winter Masterpieces. Illustrating Bowie’s incredible legacy culturally and artistically, David Bowie is, the exhibition, features more than 300 objects and films obtained by the V&A through unprecedented access to the David Bowie Archive.

Tickets to the film screenings of David Bowie is at ACMI on Friday 7 November are on sale now viaacmi.net.au or 03 8663 2583

The exhibition, David Bowie is, will open at ACMI on 16 July 2015 as part of the Victorian Government’s prestigious Melbourne Winter Masterpieces series. To register for exclusive pre-sale ticket opportunities, visit: acmi.net.au/bowie