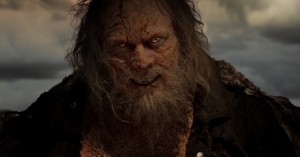 Monster Fest, Australia’s foremost celebration of cult cinema, kicks off on the 20th of November with the Melbourne premiere of the eagerly awaited Australian slasher film, CHARLIE’S FARM at Cinema Nova, Carlton.

CHARLIE’S FARM director, Chris Sun and the two lead actors, Tara Reid and Nathan Jones, will attend the premiere to open this year’s Monster Fest, in what is lining up to be the biggest and best festival since it started in 2011.

“The excitement is building as we have sourced the best horror and cult films from Australia and around the world for this years fest”, says Festival Director, Neil Foley. “This is the only chance genre fans will get to see many of these films on the big screen and meet the vast array of fantastic international guests who are attending”, he continued.

The friends are led by American actor, Tara Reid, best known for her roles in THE BIG LEBOWSKI, the AMERICAN PIE franchise, and most recently the SHARKNADO films. Having stared in over 24 films, Ms. Reid is an accomplished actor known for her larger than life onscreen persona in many iconic films.

The award winning Australian Director, Chris Sun, has created a truly iconic Australian horror character by casting the near 7′ Jones as the lead. As a world renowned special effects artist, Sun guarantees that CHARLIE’S FARM will be a gruesome and original take on the slasher genre.

“I bring to the table an Australian film that will blow the fans minds and surely stand up against the cult horror classics. It’s not only possible for an Australian film to do this but also CHARLIE’S FARM stands to be one of the biggest horror films to come out of Australia in a long time.”, said Mr. Sun.

Monster Fest runs from the 20th -30th of November at The Cinema Nova in Carlton. This year also sees Yah Yahs Bar on Smith St, Collingwood become a festival hub for the event, serving up a feast of special guests, master-classes, special events and parties – full details of which will be released mid October at the Monster Fest Official Festival Launch.

“Monster Fest has doubled in attendances every year since its foundation and this year is easily our most exciting program yet. We’re talking more guests, films, events, awards, parties, master-classes and our biggest crowds ever – 11 days and nights of non-stop cult movie insanity, bring it on!”, Foley joked.

Tickets for the Monster Fest 2014 Opening Night film, CHARLIE’S FARM, go on-sale on Tuesday 30th of September through the Cinema Nova box office – www.cinemanova.com.au. VIP Festival Passes and tickets to all Monster Fest special events and screenings will be available from mid-October.