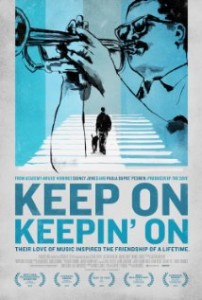 Summary: First time Australian director/drummer Alan Hicks travels to the U.S. to follow and film 89-year-old jazz legend, Clark Terry (Quincy Jones’s first teacher) over four years – to document an unlikely mentorship between Terry and a driven, blind piano prodigy, Justin Kauflin, 23. Clark mentored Miles Davis as a young musician and is among the few performers ever to have played in both Count Basie’s and Duke Ellington’s bands. IN KEEP ON KEEPIN’ ON, as Justin is invited to compete in an elite, international competition while battling terrible stage fright, we are witness to two great friends tackling the toughest challenges of their interwoven lives.

OUR KEEP ON KEEPIN’ ON REVIEWS & RATINGS:

Greg King: You can check out Greg’s Keep On Keepin’ On review on www.filmreviews.net.au