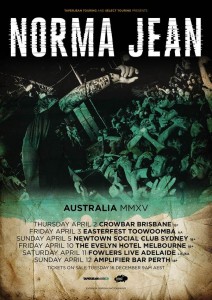 The almighty, hardcore legends, NORMA JEAN are returning to Australian shores in April.

Since their formation the Atlanta-born NORMA JEAN have continually pushed the boundaries of hardcore music. As one of the pioneers of ‘Metalcore’, NORMA JEAN have released six seminal albums and were nominated for a Grammy in 2006!

Renowned across the globe for their chaotic and pummeling live shows, NORMA JEAN incite rabid fanfare leaving those in attendance in awe and admiration of their performances. NORMA JEAN is the rare band that plays with the intensity of a hungry new act but with the precision and power of a well-toured professional group.

Since their last jaunt to Australia, NORMA JEAN released the critically acclaimed album, Wrongdoers. Alternative Press Magazine declared “…since we already referred to NORMA JEAN’S previous album, Meridional, as their ‘first true masterpiece,’ we have to call Wrongdoers their next masterpiece.”. On their last Australian tour, NORMA JEAN debuted several tracks from Wrongdoers but this will be the first time Aussie audiences will hear these songs transformed and mastered after a solid year of global touring!

Don’t miss the crushing brutality that is NORMA JEAN