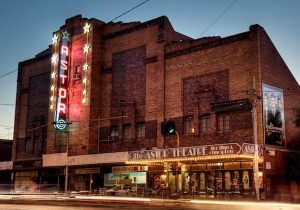 The future of one of Melbourne’s cinematic icons, the heritage-listed, art deco Astor Theatre in Windsor, again looks promising.  Palace Cinemas announce today that they are in the process of conducting due diligence with current tenant, and long-term business operator, George Florence, and landlord, Ralph Taranto.

Palace’s custodianship would see The Astor to continue operating as a single-screen, 1,150 seat auditoria, with it’s well regarded programming of both new release and classic films in tact and showing on 35 and 70 millimetre prints as well as 2K and 4K digital projectors.

Palace Cinema’s CEO, Benjamin Zeccola, whose family derived the Palace Cinemas corporate identity from the Palace Theatre in Bourke Street (where his father showed films in the mid to late 1970’s) has said of The Astor, “I am in love with the ambience and unique sense of cinema at The Astor, it reminds me of the Metro Malvern Cinema where I grew up and the loss of which still saddens me. So it is with a great deal of affection and nostalgia that we approach an arrangement between Palace Cinemas and The Astor.”

Benjamin has also said of the plans, “Palace Cinemas are keenly aware of the importance in preserving The Astor experience and, to that end, we see the business operating very much as it does today: one cinema, the continuation of the brilliant programming and maintaining the building in the art deco style in direct consultation with Heritage Victoria.”

FOTAA’s (Friends of The Astor Association) president, Vanda Hamilton, a group whose interest in the theatre is simply the preservation of The Astor as an operational single-screen cinema, open to the public, says of the news, “It is a great solution for all involved.”

The Astor cinema’s current calendar runs from December 20th through to April 5th, 2015, with more announcements regarding the program of events and developments to follow in early 2015.