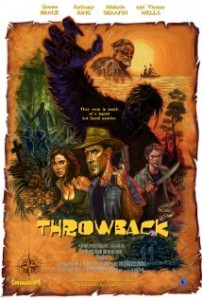 Summary: Jack (Shawn Brack) and Kent (Anthony Ring) are just two regular Aussie guys. They work together and dream of becoming rich, a plan that they feel is very close to being achieved when they find out a little more about the supposed riches of Thunderclap Newman (Andy Bramble) an outlaw who made the Australian bush his home during the pioneer days.

As Jack and Kent search for the loot though they soon find out that their friendship may not have ever been what they thought it was and with tensions at a high they suddenly find themselves faced with another enemy… the notorious Yowie that many feel is just an urban myth. Jack, Kent, local Park Ranger Rhiannon (Melanie Serafin) and local copper Detective McNab (Vernon Wells) now find themselves in a dangerous game of survival with this bloodthirsty beast.

The best thing to come out of Monster Fest 2014 was just how many good genre filmmakers Australia still has. One person that needs to be added to that list is director/screenwriter Travis Bain who has delivered the exceptional Throwback, a creature feature made on such a small budget it wouldn’t even cover the catering budget for one day on most feature film shoots.

Now sometimes a low budget on a genre flick can be a bad thing. No money results in some pretty average special effects and a normally a creature that looks like it may have been borrowed from a Primary School theatre department. But that certainly isn’t the case with Throwback, a fantastic genre flick that deserves to be mentioned in the same breath as classics such as Razorback.

As a director Bain needs to be thrown a lot of praise. Throwback is a film that looks a million dollars and the fact that he chose an almost guerrilla style of filmmaking has meant that the Aussie bush has never looked more menacing. Bain also knows how to create tension throughout the film and for the most part of Throwback the audience sits there in complete silence and awe knowing that at any moment any character may meet their fate, either at the hands of another greedy human and thanks to the Yowie himself. The fact that ‘some’ of the characters are set-up as likable also means that the audience has a vested interest in wanting to see them pull through… now that isn’t something that happens in all horror flicks these days.

But of course the big test for a ‘creature feature’ is always how does the creature look and do the special effects look plausible. To Bain’s credit he gets a big tick in all the boxes. The Yowie (played by Warren Clements) looks so realistic that you may wonder whether or not going for a casual walk through the Aussie bush is such a great idea. The believability of the Yowie goes a long way in making this film work because it adds to the tension of scenes throughout the film instead of having the audience sniggering whenever the beast appears. The minimal special effects used also look pretty good and again adds to the film’s atmosphere.

Credit must also be paid to the cast of Throwback many of which were involved in this film for years. Shawn Brack, Anthony Ring and Melanie Serafin all put in great performances and as a cinema fan you can only hope that their performances here will lead to successful acting careers because they truly deserve it. Anthony Ring morphs into the ‘bad guy’ brilliantly well while Brack and Serafin’s natural performances make them instantly likable… believe it or not an important element when you are supposed to give a damn over whether they live or die.

Of course cult film fans are also in for a treat when it comes to the casting in Throwback because in a well scripted cameo the legendary Vernon Wells (who many would know from Mad Max 2 and opposite Arnold Schwarznegger in Commando) pops up in a strong performance as Detective McNab… a man desperate to solve the spate of murders that have been occurring in the area.

Ironically Throwback is a throwback to the legendary Aussie cult films that used to have a young Quentin Tarantino so excited. Edgy, suspenseful and nasty Throwback is a gem of a film that also reminds filmmakers and audiences out there that it is more than okay to throw in a good story line and well developed characters when you are making a creature feature. Throwback is the kind of film where you are literally on the edge of your seat throughout and it announces Travis Bain as one of Australia’s most promising directors… he is someone to add to your ‘watch where his career goes’ list. Throwback is a gem of a film that is a must see for horror fans everywhere.