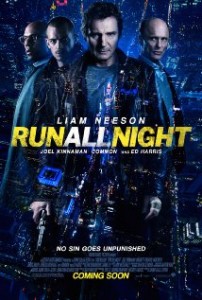 Summary:  Jimmy Conlon (Liam Neeson) is a washed up gangster, a gangster with more notches under his belt due to his work with good friend Shawn Maguire (Ed Harris) then even he would care to admit. Those kills mount so high that he has in the ‘Moby Dick’ for Detective Harding (Vincent D’Onofrio) who is determined to bring him down but has never really been sure which murders he was responsible for and which ones were committed by somebody else.

But Jimmy isn’t living by his gun any more. No these days he spends his time drunk and asleep in Shawn’s bar, which seemingly seems to be managed by his also criminally-minded son Danny (Boyd Holbrook). Meanwhile Jimmy’s own son Mike (Joel Kinnaman) keeps out of the gangster lifestyle choosing to be away from his father and do an honest job as a limo driver.

Suddenly though Mike’s world is turned upside down when his job causes him to witness a murder committed by his former friend, Danny. Now suddenly Danny and Shawn have their sites set on Mike who suddenly finds himself being reluctantly helped by his old man.

OUR RUN ALL NIGHT REVIEWS & RATINGS:

The gangster film genre (yes a sub-genre of the crime genre) can be a slippery slope for females. Get it wrong and you end up looking incredibly stupid like director Ruben Fleischer did with Gangster Squad. Yes everyone wants to make the next Godfather, but few come close, in recent times it has really only been films like Animal Kingdom, The Departed, Two Hands and Killing Them Softly that have ever come anywhere near the masterpiece of the genre though.

With Run All Night though director, Jaume Collet-Serra, who started as a horror director with House Of Wax and Orphan before directing Neeson it great thrillers Non-Stop and Unknown, comes dangerously close to making a film that deserves to be listed amongst the ‘better’ films in this realm.

Collet-Serra’s horror background certainly seems to help him in the making of Run All Night. Unlike some of the softer gangster flicks around he isn’t afraid to let a little bit of blood splatter, while he brings a dark sinister urban feel to Brad Ingelsby’s script, which already uses the city of New York as a character anyway. The best part of Run All Night though is the fact that Collet-Serra keeps track of the character relationships awfully well and never allows the film to become a storyless shoot-‘em-up like the mediocre Denzel Washington led The Equalizer which surfaced last year. The fact that Ingelsby’s screenplay sets this film over the course of one night also shows that he is a screenwriter to watch.

Instead Collet-Serra keeps the tension running throughout this film, not only from having Mike and Jimmy in constant danger whether through a high speed car chase or a slow paced forest ‘hunt’, but by realizing that the friction generated from the fractured relationships that these characters share with each other is more than enough to have the audience on their seat as well… a tension that is also enhanced by a great soundtrack by Junkie XL.

In fact the only weakness with Run All Night seems to be storyline surrounding Mr. Price (played by the rapper Common), the mysterious hitman hired to track down Mike and Jimmy. While most of the characters in Run All Night escape that the Hollywood gangster clichés, Mr. Price certainly doesn’t. Very little character background is given about him which doesn’t make him mysterious, it just makes him slightly annoying. There seems to be very little motivation to why the character exists in the film except to lead up to the finale, and he would really be more at place in a film like Sin City. Not sure why he was written into the original screenplay when two great adversaries were already set up with Shawn and Detective Harding… the latter a character that certainly deserved a lot more screen time.

Also making Run All Night a must see are the performances of the cast. Neeson vs Harris is one of the best enemy pairings in modern cinema and the two veteran actors go toe-to-toe with not only violence but also a remarkably tension filled dialogue driven scene where the two face off in a crowded restaurant over a meal. Neeson shrugs off the misses he recently delivered with Taken 3 and A Walk Among The Tombstones and once again returns to what we saw in Non-Stop a man who understands the action thriller genre more than most of his counterparts.

The younger cast step up as well with Joel Kinnaman making us forget RoboCop with a performance not too dissimilar to his one in The Killing while Boyd Holbrook also seems to relish the opportunity of playing the ‘bad guy.’ Common doesn’t do much to suggest that he should turn his back on his music career while the brave casting of Law & Order: Criminal Intent star Vincent D’Onofrio to play another New York cop (like playing one on TV for ten years wasn’t enough) actually seems to pay off despite the role not having quite enough meat to make him stand out.

Run All Night is a stylish gangster flick that shows that there is still life in this genre and Liam Neeson yet. Jaume Collet-Serra again reminds us why he is the leading thriller director around at the moment with a film that I am certain is going to be talked about for years to come.

You can read Greg’s full Run All Night review on www.filmreviews.net.au