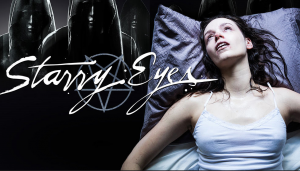 Monster Pictures, Australia’s leading distributor of horror and genre films is proud to announce the release on DVD & BluRay of STARRY EYES, the winner of ‘Best Film‘ at the 2014 Monster Fest.

To celebrate its release, Monster Pictures, in association with Backlot Studios, is hosting a special event screening of the film on Friday 13th of March in Melbourne, Australia.

The special event screening will also include a live Skype Q&A session with the star of the film, award winning actor Alex Essoe, along with giveaways, prizes and more.

A ticket is included with every pre-ordered copy of STARRY EYES from the Monster Pictures website and Monster will also have other new release DVDs and BluRays available on the night for only $10 each!

“Recently we have seen one of our biggest releases become the most pirated Australian film ever”, said Neil Foley, Director of Monster Pictures, referring to the acclaimed JOHN DOE: VIGILANTE. “By putting on special event screenings we are trying to counter the pirating culture by providing true genre fans with an opportunity to do more than just watch the films. We want the fans to engage with how these films should be experienced and provide screening events that elevate the genre”, he continued.

The STARRY EYES screening is the first in a series of new releases that will be shown on the 13th of every month at Backlot Studios as part of the ‘Monster Fest Presents’ program.

April will see the amazing HONEYMOON screened, followed by LET US PREY in May, CHARLIE’S FARM in June, THE EDITOR in July and WHITE SETTLERS in August.

“Backlot is committed to providing filmmakers and distributors with the best opportunities to have their films seen as they were intended”, said Tony Ianiro of Backlot Studios. “We are proud to partner with Monster Pictures to put on the Monster Fest Presents nights as everyone benefits – the filmmakers, the distributors and most of all the genre fans, as they get to experience the films in the best way possible and enjoy the special events that the Monster team are putting together”, he continued.

“We expect Monster Fest Presents: STARRY EYES to sell out, as not only is it a fantastic film, but fans will want the opportunity of speaking with Alex Essoe in the intimate and luxurious surroundings of Backlot Studios”, said David Leadbetter, Monster Fest National Marketing Manager. “The ongoing season of Monster Fest Presents is going to create an important monthly genre film night in Melbourne and we are excited about the next Monster Fest film festival, scheduled for November 2015”. he continued.

Tickets are strictly limited. 1 ticket per copy of STARRY EYES purchased on the website, available for collection from Backlot on the night. An extra ticket to the STARRY EYES screening is available when purchasing the other fantastic March release, THERE’S SOMETHING IN THE PILLIGA.