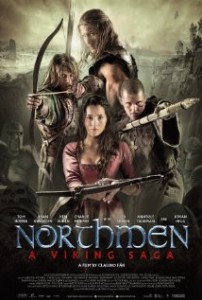 Summary: When a vicious storm sinks the sip of a group of Northmen (Vikings) the group with is led by the young but rebellious Asbjorn (Tom Hooper) finds themselves washed up on the Land of Alba… somewhere they are certainly enemies. Desperate to find a safe haven within a nearby Viking settlement the group which also features Bjorn (James Norton), Thorald (Ken Duken) and Valli (Johan Hegg) soon finds themselves at logger heads with the locals and a running battle ensues.

The tribe becomes even more unwanted when they come across Inghean (Charlie Murphy), a princess with Soothsayer abilities. With her father, King Dunchaid (Danny Keogh) desperate to get rid of her and this band of rebels he quickly calls upon determined mercenary Hjorr (Ed Skrein) to hunt them down with his Wolf Pack. Now the hunted the Viking tribe soon finds an unusual ally in the form of a sword wielding Monk, Conall (Ryan Kwanten).

Medieval times are certainly the flavor of the month at the moment in Hollywood. With shows like Game Of Thrones doing so exceptionally well on the small screen and The Hobbit crushing all before it at the cinema box office it is not surprising that everybody is clambering over each other to find the next sword-filled hit. Well now comes Northmen – A Viking Saga, an action film that is going to be lapped up by anybody that enjoys Vikings the television series.

Directed by Claudio Fah (the man responsible for films like Sniper: Reloaded and Hollow Man II) Northmen – A Viking Saga is a more than passable action film that is going to be enjoyed by those fascinated by Norse mythology. The film works because it doesn’t try to be anything that it isn’t. This isn’t high art, nor does it need to be, instead this is an action film that keeps its audience entertained with some adrenalin fuelled battle sequences and a script that certainly doesn’t hold back on the suspense, especially with the intriguing storyline around Inghean.

One of the things that will hit fans of Vikings straightaway is this film’s similarity to the hit television series… but that certainly isn’t a bad thing. Yes some people may be quick to criticize the storyline involving the ‘religious man’ Conall which is similar to the one that is told throughout Vikings it should also be pointed out that this is the kind of the film that will make fans of the television series sit up and enjoy Northmen – A Viking Saga.

The second thing that makes this a film that its audience will quickly warm to is that despite the fact the Vikings are ruthless killers the screenwriters involved have been smart enough to make them very likable. Yes they may be a little light on characterization and almost interchangeable with each other but they are so likable, and Hjorr’s group so unlikable, that you actually want to see them all survive. That instantly raises the stakes whenever a battle breaks out.

Because of the nature of the film the cast doesn’t exactly get to showcase any amazing acting skills. Ed Skrein growls and snarls his way through his role as the film’s bad guy, while Aussie Ryan Kwanten does just enough to show Hollywood that perhaps he is ready for the action hero role. However, the big winner in Northmen – A Viking Saga is Charlie Murphy, the young actress who has recently had roles in ’71 and Philomena really shines here and shows that she is capable of big things in the future.

While Northmen – A Viking Saga isn’t exactly going to win any major awards it is the kind of action film that you can simply flick on and then just sit back and relax. With enough epic sword battles to keep fans of The Lord Of The Rings’ fans happy and some classy looking scenes (especially the tower sequence) helmed by Claudio Fah this is one lower budget action film that does enough to be enjoyed.