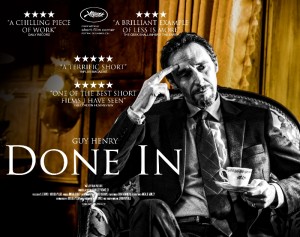 Dark and touching, Done In tells the story of a man writing a goodbye to the world while recalling memories of life in a country manor house.

Written and directed by Adam Stephen Kelly and produced by SJ Evans (DEAD OF THE NITE), the film had its world premiere as part of the prestigious Cannes Film Festival in 2014, which kick-started a highly successful big-screen tour at festivals around the world. The dark drama most recently screened at Cardiff Independent Film Festival, where it won the inaugural Brian Hibbard Award, in addition to receiving a nomination for Best Actor.

Guy Henry is best known for his roles as Henrik Hanssen in the BBC’s long-running, BAFTA-winning series HOLBY CITY, and as Pius Thicknesse in HARRY POTTER AND THE DEATHLY HALLOWS.