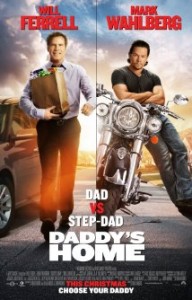 Summary: Brad Whitaker (Will Ferrell) has always wanted to be a Dad but an unfortunate accident in a dental chair has left that dream in tatters. However, now he is married to ready-made Mum, Sara (Linda Cardellini), but is finding winning over her children Dylan (Owen Vaccaro) and Megan (Scarlett Estevez) a lot harder than he thought it would be.

Hard work pays off though but just as the two kids are starting to warm to him Sara’s ex, the children’s father, the ever-ready, man-of-the-year-material Dusty Mayron (Mark Wahlberg) shows up and he has just one plan in mind – to make Brad look incompetent and to win back Sara and the kids.

This year hasn’t been a great year for comedy. A lot have been released and lot have sucked. Well now comes Daddy’s Home which decides to do something a little different, and that is sit right in the middle of the road.

Actually to be honest Daddy’s Home is a bit of a strange watch. It is one of those movies that is completely ruined by the trailer. As a result of seeing most of the gags in the trailer you can pretty much watch this film with just a chuckle here and there. A shame because at times such as Brad skateboarding off a half-pipe into a power-line I found myself thinking ‘I probably would been laughing right now if it weren’t for the fact that I’ve already seen in the trailer in cinemas ten times.’ The sad thing is that happens for most of the laughs throughout the film which must be pretty disappointing for screenwriter/director Sean Anders.

Like Anders’ career itself (this is the man that brought us highs like We’re The Millers but also films like Dumb And Dumber To) a lot of the laughs in Daddy’s Home are all over the place. Yes a lot of the slapstick is ruined by the trailer but then some of the other comedy throughout the film seems to come from a weird place. While the ‘stories’ from Brad’s boss Leo (Thomas Haden Church) are often the funniest part of the film, there are other times when Anders’ humor feels mistimed or misplaced. Two examples are when Leo has a deeply personal conversation with Brad and then the camera pans back to reveal it is in the middle of a meeting with other people (feels forced) or when Leo and Brad are trying to convince Griff (Hannibal Buress) to aid Brad in a clichéd movie run-down-the-hall… that scene just goes on for far too long.

The other abnormality with the humor of Daddy’s Home is that it feels like Mark Wahlberg is a lot funnier in the film that what Will Ferrell is. It is obvious that even Anders knew the role of Dusty provided much of the laughs because at one point Ferrell was supposed to be Dusty before obviously someone realised that there is no way in hell he could pull off being an aloof tough Special Ops member. It what would have been an even bigger disaster Vince Vaughn was also considered for the role so we should be thankful that Wahlberg ends up playing Dusty because he is the highlight of the film… often stealing the limelight from Ferrell mid-scene.

Being out-acted this time round seems to be part of the landscape for Ferrell. His character is ‘boring’ which in fairness may have been Anders’ intention, but the flare shown by Wahlberg makes Dusty a much more impressive character while Ferrell also has a lot of his thunder stolen by Thomas Haden Church whose comedic timing and droll delivery works an absolute treat and he provides many of the laughs throughout the film.

Sure Anders certainly didn’t deliver a comedic masterpiece with Daddy’s Home but any filmmaker deserves not to have their ‘surprises’ or ‘laughs’ intended to impress the audience ruined by the trailer that is supposed to promote the film. With that putting the film behind the eight ball already Daddy’s Home is an up-and-down the film. The film seems to work best when it forgets about trying to be funny and instead goes for more touching scenes, like a step-Dad trying his best with his kids, but also falls on its face when it tries to ‘show-up’ other films’ stupidity like with dance-offs etc.  Daddy’s Home is a middle of the road comedy that doesn’t provide anywhere near as many laughs as it should.

Daddy’s Home directed by Sean Anders sees the story of a Dad and a Step Dad dealing with the facts of having two Dads in the one household. Brad (Will Ferrell) is a man who has always wanted to be a Dad and his life as a Step Dad to two kids and husband to his wife Sarah (Linda Cardellini) is going well until his wife’s ex-husband shows up. Dusty (Mark Wahlberg is a man who is tough and competitive which certainly is shown throughout the film.

Throughout the film Dusty and Brad go head to head and compete to prove to the kids and Sarah, who can be the better parent. What I loved about the film was the constant humour. In most comedy movies sometimes the humour seems almost like it is forced on you and almost makes you feel like they are trying so hard to make you laugh with scenes and jokes that aren’t very funny at all. In Daddy’s Home the humour was great. It was humour that was very quick in some cases and that’s what I loved. It was humour that we would all experience and things that we would laugh at in everyday life.

The one thing I thought of during this movie is that Mark Wahlberg and Will Ferrell were great together on screen. To me they were a comedy duo that I never expected and it would be great to see them do more films together in the future. Even though the film is a comedy there was some drama and emotional events which really portrayed what it is like for families where there are more than two parents. Daddy’s Home, I think, is a great movie for the whole family and is definitely worth seeing if you have the option of going to the cinema.

It was funny, enjoyable, had a good story line, great cast and was just an all over good film to watch. Daddy’s Home staring Will Ferrell and Mark Wahlberg is in cinemas now! Check it out!