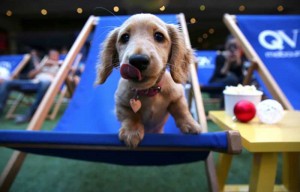 The deckchair cinema is perched on the astroturf outside the Queen Victoria Women’s Centre on Thursday to Sunday nights until 28 February. Tickets are on sale now via www.qvcinema.com.au

Melbourne filmmaker and film programmer Gus Berger has curated the season of themed screenings, including Aussie Flicks around Australia Day, a Music Movie Week and a Melbourne Independent Film Focus in February. The rest of the season includes cult classics, 80s favourites and special event screenings.

“We’re pretty thrilled to report QV Cinema has already been a huge hit with audiences, with most sessions selling out. We were overwhelmed by interest in our bring-your-dog Best in Show screening and Baz Luhrmann’s Romeo & Juliet with the pre film performance from the Australian Shakespeare Company. We’re predicting our January and February program to be even bigger,” says Gus, who revived and programmed the George Revival Cinema, and runs the roving Blow Up Cinema.

Aussie Flicks to celebrate Australia Day (21-24 January) offers a line up of Aussie icons with Muriel’s Wedding, Priscilla Queen of the Desert and The Castle. The screening of Red Dog on Thursday 21 February is the icing on the pavlova, with audiences once again invited to bring their dogs to the movies! All proceeds from ticket sales to go to The Lost Dogs’ Home.

The Music Movie Week runs from 4-7 February with the story of Amy Winehouse in her own words, Amy, Searching for Sugar Man, the Beach Boys biopic Love & Mercy and the multi award winning hit Whiplash.

A not to be missed event screening is on 19 February with cult Irish film The Commitments programmed, with complimentary pre film cocktails from Dublin’s Teeling Whiskey.

The Melbourne Independent Film Focus on 25 and 26 February features the best of Melbourne made short films by Made in Melbourne Film Festival and the best of RMIT student and alumni films.

A surprise screening is programmed for closing night on Sunday 28 February. Audiences can expect something special!

Film lovers can wander down Artemis or Red Cape Lane to the open-air courtyard for intimate screenings of QV Outdoor Cinema’s eclectic variety of films. Grab a wrap from Schnitz, a Movenpick ice cream or a dark hot chocolate from Max Brenner and lounge back in an intimate 80-seat deckchair cinema nestled in the heart of the ‘city within the city’.

Worlds apart from other retail precincts in Melbourne, QV represents the quintessential Melbourne lifestyle. Intimate laneways in the urban precinct give visitors the freedom to wander and discover the eclectic mix of shops, cafes and restaurants at their own pace. Located on the corner of Lonsdale and Swanston Streets, QV has something for everyone with boutiques, enlightening entertainment and cosmopolitan bars and restaurants.