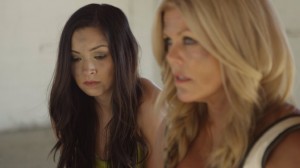 Subculture Entertainment’s Dave Griffiths caught up with recently crowned Miss Asia USA Ashley Park and chatted to her about her title and her upcoming role in Rogue Warrior: Robot Fighter. So here it is our Ashley Park interview.

First of all, Ashley, thank you for taking the time to do this interview for us and congratulations on your recent crowning.

Thank you very much! I’m happy to do the interview.

Ashley, first of all can I ask you tell us a little bit about how you became Miss Asia USA and what do you have to do while you are the reigning queen?

I was named Miss Korea USA 2015 by Virgelia Productions, which allowed me the opportunity to compete in the Miss Asia USA pageant this past November. After quite a bit of rigorous training and preparation, I was fortunate enough to win the pageant. As reigning queen, I will attend quite a few charity and red carpet events. It is the duty of every titleholder to represent the Miss Asia USA organization and Virgelia Productions with integrity, poise and elegance. I’m definitely excited for a busy and productive year as Miss Asia USA.

I read that your love for acting started at a very early age. Can you tell us how that love begun and what were the films that inspired you want to be an actress while you were growing up?

I would have to say that My Fair Lady stands out as the film that inspired me the most as a child. I memorized every song, and recited all of Eliza Doolittle’s dialogue (accents and all) to my family over and over again. I also owned every Disney Princess movie, and was quite obsessed with memorizing those as well.

Were you one of the students at your High School that was also cast in the school productions? If so what was your favourite character/production that you did?

You know, it’s crazy that I’ve never really done theater. I always wanted to! I remember hearing about auditions for school productions in high school, but I am extremely competitive and tend to only focus on one thing at a time. As much as I wanted to try out, I was on a very rigorous training regimen that required hours of practice every day. As a runner, my main goal at the time was to win every race and to earn a full scholarship to college.

How difficult was your decision to give up on a promising career as an athlete and go to Hollywood to pursue acting?

It was very difficult to give up cross country and track because it had been my life since I was 12. I didn’t really know much else. However, I also knew that it was time to move on because my heart was no longer in it. My only regret is that I wish I would have moved to LA earlier. It was the best decision I’ve ever made!

What was the first role were ever chosen for in Hollywood and how nervous were you when you turned up on set for the first time?

I think the first role I did was a project with some students at my very first acting program in LA. It was actually a very well done short parody video, and we got over a million views within the first week, I believe. I was probably a little anxious, but I mainly just remember having a great time. I recently did another viral video called Wedding Dresses Across Asia on BuzzFeed. These types of videos are always a blast to shoot.

You also got to play a role in the famous Days Of Our Lives, what was it like on set and were you nervous given the show’s popularity?

I was definitely a bit nervous, seeing as it was my first time on a network show. But the actors I met were so nice, and made me feel very comfortable on set. I really enjoyed being on such an efficient set with so many talented people.

One of the latest films you have worked on, Rogue Warrior: Robot Fighter, is about to get released in Australia. Can you tell us a little bit about the movie and a little about your character, Rhianna?

It’s a desert sci-fi in the vein of Mad Max and Star Wars. It was actually shot in some of the same locations as Return of the Jedi. My character Rhianna was such a blast to play because she’s tough, but still girly. She has a lot of layers, and it was fun to play around with her many different character traits.

How did you first become involved with Rogue Warrior: Robot Fighter and what was your first reaction after you read the script?

I was the first girl to audition for the role, and was thrilled to find out I’d been cast to play Rhianna. I absolutely loved the script! It’s so much more than just an action film. It has a truly in-depth story that follows Sienna (played by Tracey Birdsall), and her character’s journey to self-discovery.

How challenging did you find it to work on a big scale science fiction film like this?

I actually had a blast! Perhaps because I love a good challenge. We shot on location in the desert, so it was very hot, which was probably the most difficult part. But the cast had such great chemistry, and I loved the challenge of running and climbing all the sand dunes.

Are you a fan of science fiction? If so what movies have you loved over the years?

Of course, but I’m a fan of every genre, I think! I’m such a movie and TV show junkie. In terms of science fiction, I’d have to say Star Wars and Star Trek, of course. I also loved Avatar, Matrix and Her, to name a few. I’m a big fan of the shows Orphan Black, Continuum and Humans.

What was it like working with Neil Johnson, he has really developed a reputation of being one of the best sci-fi directors around at the moment?

Neil is wonderful! He is such a great director, and is so in tune with the actor. He was so relaxed on set, which I think really helps the actors and crew perform at their best level.

Lastly, Ashley, can you tell us about some of the other films that we will be seeing you in shortly?

Certainly. I worked on a feature film recently that will also be released soon, called Day For Night. It’s a wonderful film noir that stars the legendary Lin Shaye, Peter Bogdanovich and Sally Kirkland. My character’s name is Abelie, and I’m so excited to see this wonderful script by Guy J. Jackson come to life. I am also preparing to shoot another desert sci-fi soon, called Trapdoor. It’s a female-focused thriller in the vein of The Descent.