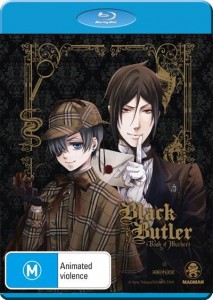 Summary: At the behest of the Queen, Earl Ciel Phantomhive hosts a lavish dinner party attended by several of the finest members of polite society—as well as struggling author, Arthur. But as the party reaches its high, a terrible murder takes place and none other than the Earl himself is suspected of the crime.

As a violent storm rages on outside, the death count continues to climb. The Phantomhive household and their eminent guests find they must cooperate in order to solve this mystery before they too fall prey to the mysterious murderer. However, it seems that not even the perfect butler, Sebastian Michaelis, is safe from this horror.

Black Butler: Book Of Murder is a 2 part miniseries, originally shown in Japanese cinemas, which acts as the fourth instalment of the ‘Black Butler’ anime franchise. It is released on DVD and BluRay in Australia by MadMan Entertainment.

The story revolves around a dinner party at the Phantomhive manour, as ordered by the Queen. Ciel Phantomhive is the Queen’s ‘watchdog’ and although just a boy he always carries out his orders and protects her majesty with the aid of his demonic butler, Sebastian.

In this instalment his loyalty is under scrutiny so the Queen order Ciel to host a dinner for her cousin, where trouble is expected. The trouble in question takes the form of an old-style murder mystery, of the kind seen in classic British mystery novels of Sir Arthur Conan-Doyle and Agatha Christie. This genre has been recreated particularly well, with the added twist of grand scheming and devilry that one expects from the Black Butler series.

Although this very genre-specific story is a slight departure from the usual style of the series, it is a faithful follow-on to the previous 3 instalments. A few inferences in the plot do incorporate details from the previous chapters, so knowledge of these makes for a more rewarding viewing. I found the story to be highly engaging with plot developments that keep you on the edge of your seat to discover the resolution.

Great characters fill this tale with most development being given to the guest cast, being that this is a finite miniseries. The regular cast have already been well developed so it is more important in this instance to get the bit-players across in a way that rounds their characters enough to understand their reactions and behaviours in the context of the narrative. That said, there does seem to be a little more impetus for Ciel to function on his own without relying on Sebastian.

I think the only loss in this regard is not seeing more of the Phantomhive staff have their unique character moments which usually come out more towards the end of each series as a bit of a surprise twist, but this time is incorporated from the start in more subtle ways. However, this leaves little wastage and things proceed naturally toward the ultimate resolution.

The Japanese voice cast are always impeccable and this is how I choose to view my anime. However, I did take the take to check out the American dub for the sake of this review. I don’t think a lot of the voices fit the characters too well – Sebastian for example sounds a little too old and less smooth as his character is often revealed to be.

However, props should be given to the American cast for taking the time and effort to provide suitable accents for each character and their background (predominantly British, with Chinese and Germanic characters). I appreciate that level of effort as it would be otherwise jarring to the audience who are supposed to be immersed in a drama in old England.

The art and animate was brilliant as usual, and the creators have successfully made reference to past elements and tied loose ends. This allows the series to move forward in a new chapter where they can, perhaps, create a new feel or a new beginning.

The characters are unique and their styles and those of Victorian London have been well presented and recreated, with a little bit of ‘anime flair’ to spice it up.

The settings are interesting and beautiful and help to immerse the audience in the world being presented. Action and animation are top quality and always a joy to watch. It’s always hard to look away, especially when Sebastian and the Phantomhive staff get into action.

The DVD is lite on special features, being more of a ‘special miniseries / movie collection’ rather than a full series in its own right. Included on this DVD release are the US trailer and Feature commentary on the second instalment by members of the US voice cast.

The commentary is good for those who watch the dubbed version and enjoy these performers, but for someone like me who enjoys the original soundtrack and the production as a whole it might have been nice to have a featurette or something.

On the whole, this is a very enjoyable anime, and I give it 4 out of 5.