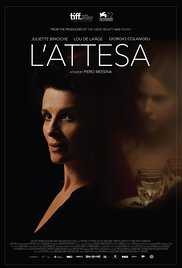 Summary: A mother unexpectedly meets her son’s fiancée at a villa in Sicily and gets to know her as she waits for her son to arrive.

OUR THE WAIT REVIEWS & RATINGS:

The first thing that hits you about ‘The Wait’ is that it is visually spectacular. The opening scene sees Massina take a leaf out of Australian filmmaker Jim Stamatakos’ playbook as he shows the audience a very visual look of mourners paying respects at Guiseppe’s funeral. This style of filmmaking is continued throughout the film as Massina will suddenly focus on things such as a piece of stitching hanging from a chair, that most other directors would completely miss. As a result some audience members will say that ‘The Wait’ drags along… but I dare to differ.

Massina’s style of filmmaking only makes this film even more suspenseful. As the film goes along the audience will find themselves waiting for Jeanne to pick up on a clue that Guiseppe is dead or eagerly wait for Anna to breakdown and finally bury the charade. At times during the film you even find yourself wondering whether or not Guisippe is dead… is his mother simply trying to hid the fact that he doesn’t want to see Jeanne. There is also the fact that this style of slow , drawn out filmmaking also matches the long, hot days that the characters are enduring.

Aside from the obvious suspense surrounding whether or not Anna will tell Jeanne what has happened or not the audience also find themselves drawn into a number of subplots including one that particularly suspenseful walk through the Italian countryside where you are left wondering whether or not the naive Jeanne is about to be attacked by two men she has just befriended at the lake. In a piece of cinematic brilliance Massina allows the whole thing to play out with looks between the characters and doesn’t rely on dialogue to raise the suspense.

In a lot of ways Massina’s style of filmmaking is very anti-Hollywood. He doesn’t spell everything out for his audience, instead he will have long scenes of no dialogue between the characters as they discover something new or are showing emotion or he’ll let the story move along through voice mails… but in an artistic way. The one thing I never found though was that ‘The Wait’ bored me. No matter how long a silent scene went for Massina’s amazing way he captured the visuals kept me totally intrigued to the screen. Even watching a fire-fighting helicopter pick up water from a lake seems strangely poetic when brought to the audience by Massina and his cinematographer, Francesco Di Giacomo (‘The Eternal City’)

As usual Juliette Binoche shines in an artistic film. She relishes on scenes where she has no dialogue and is forced to let her emotions be shown with looks and expressions… to be honest if you loved her in ‘The Clouds Of Sils Maria’ then you are going to be equally impressed here. She is also well supported by young Lou de Laage who announces herself as an actress that is set to take European cinema by storm. With her beautiful looks and brilliant acting skills… the world is hers.

To me ‘The Wait’ is a beautifully shot Italian film that makes me eagerly await for Piero Messina’s next film. His style his visually impressive and he can tell a story in a way that very few filmmakers can. ‘The Wait’ might be slow at times, but it is certainly far from a disappointment.