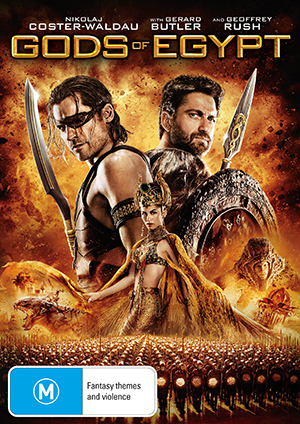 Summary: Mortal hero Bek teams with the god Horus in an alliance against Set, the merciless god of darkness, who has usurped Egypt’s throne, plunging the once peaceful and prosperous empire into chaos and conflict.

OUR GODS OF EGYPT REVIEWS & RATINGS:

Sometimes when a film comes out and meets negative press you have to wonder whether some of the critics were watching the same film you just did. While ‘Gods Of Egypt’ isn’t exactly an Oscar winning film it is a fun sci-fi film that really does show the creative mind of Alex Proyas (The Crow). If you’re a fan of films like The Scorpion King then you’re really going to want to give this one a look.

Set in ancient Egyptian mythology ‘Gods Of Egypt’ shows what happens after the throne is stolen from Horus (Nikolaj Coster-Waldau – ‘Game Of Thrones’) by Set (Gerald Butler – ‘300’) whose plains will bring about the destruction of humanity. With Horus’ power gone he goes into hiding, but some like the innocent Zaya (Courtney Eaton – Mad Max: Fury Road) believe he can still save humanity. After her death the love of her life, Bek (Brenton Thwaites – Maleficent), goes in search of Horus in a bid to try and save the world.

Storywise ‘Gods Of Egypt’ works just like the sci-fi films that many of us grew up watching, films like ‘Never Ending Story.’ While it might just be a little too violent for kids, this is the kind of film that can be enjoyed by teens and adults alike as it is nowhere near as violent as a film like ‘300.’ The creativity is there throughout the film and Proyas is a gifted enough director to work with his screenwriters, Matt Sazama (‘Dracula Untold’) and Burk Sharpless (‘The Last Witch Hunter’), to create a film that not only creates suspense and action but also has a storyline that will allow the audience to actually care what happens to the characters at hand.

One of the biggest criticisms levelled at this film is that the CGI and special effects don’t look as good as they should but it is very obvious that what Proyas wanted with this film was for it to look and feel like a graphic novel or comic. It is impossible to fathom that a man who brought us a films like ‘The Crow’ and ‘Dark City’ would ever deliver a film that didn’t look the way he wanted it to – especially when he had the effects team who put together ‘Mad Max: Fury Road’ working with him as well.

Perhaps one of the most fun parts of watching ‘Gods Of Egypt’ for an Australian audience is playing a simple game called ‘spot the Aussie.’ Aside from Brenton Thwaites in the lead role other Australian actors including Geoffrey Rush (‘Shine’) and Bryan Brown (‘Two Hands’) pop in roles and it is great to see them getting international expose like this. As far as the acting of the leads go Brenton Thwaites again shows that he has more than enough skill to be a leading man in an action film like this while audience members also get to see everybody’s favourite Lannister, Nikolaj Coster-Waldau, flex his acting muscle and get to play the hero for once. Also announcing herself as a future star is Courtney Eaton, the young, inexperienced, Western Australian showing experience above her years and not being overwhelmed by appearing in a blockbuster like this.

The best way to approach ‘Gods Of Egypt’ is to just look at like you’re going to watch a fun movie. This is the kind of film that is going to be loved by anybody that has any interest in mythology while some of the epic battle scenes will do more than enough to keep the action junkies very happy. Don’t get put off by the negative press and make sure you check out ‘Gods Of Egypt’.

Other Subculture Entertainment Gods Of Egypt reviews: You can also listen to our Gods of Egypt review on The Good The Bad The Ugly Film Show Ep #167.