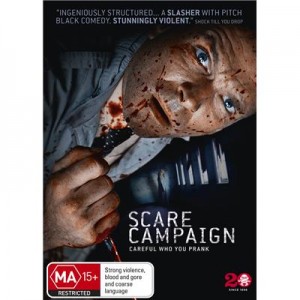 Beware Australia Scare Campaign is coming to town. Australian horror fans are a supportive bunch, once they got to gloat about the past glory days of the genre as even the likes of Quentin Tarantino talked about the fact that the Ozploitation films of the 1970s and 1980s were huge influences on their careers. Then came the resurgence of  Aussie horror with cult films like Wolf Creek suddenly becoming so popular they were considered mainstream.

One of the films to capitalise on that resurgence was 100 Bloody Acres, an Aussie horror that did so unbelievably well that it even had the most hardened film critics heaping love onto the film. The sheer amount of fans the film generated has now meant that the filmmakers behind the classic, brotherly duo Colin and Cameron Cairnes now have an unprecedented amount of ground swell ahead of the release of their brand new film Scare Campaign.

In the 24 hours prior to the films Australian premiere at Monster Fest 2015 I took time to sit down with the Cairnes Brothers and the interview starts with them in shock and disbelief as I tell them Scare Campaign is trending on every form of social media they could imagine and they are being labelled ‘The Kings Of Oz Horror.’

‘Wait. What are they calling us?” asks Cam. ‘Do we get a crown for that?’ ‘They are going to look really stupid if nobody turns up to our premiere,’ laughs Colin.

He need not have worried, as it turned out Scare Campaign provided Monster Fest with its highest ticket sales for an Opening Night Film in its history. Monster Pictures sold so many tickets to the event that they ended up having to run the film in two cinemas simultaneously. Then just to add to the groundswell Scare Campaign scooped Monster Fest’s award’s night winning Best Feature Screenplay, Best Sound In A Feature, Best Feature Film Director and the coveted Crystal Monster for Best Film.

So for those who haven’t got caught up in this massive amount of ground swell, Cam is quick to explain exactly what the film is all about and how it first came into being. “Well it all came about rather quickly,” he says. “We made 100 Bloody Acres, we released that and then we were keen to make something else as quickly as possible so we sat down with our producer and pitched a whole lot of ideas that we had to him and the idea for Scare Campaign came out and seemed pretty cool and we were all pretty excited about it. We thought it would be something we get going quickly as it seemed easy to pitch, and within a year of coming up with the idea we were shooting the film. Of course we went through four or five drafts of script first but everyone we spoke to about this film got really excited about… even distributors.

Part of what has people so excited about Scare Campaign is the names that feature on the cast list for the film – names ranging from Aussie screen legend Sigrid Thornton through to Aussie-on-the-rise Olivia DeJonge who just appeared in M. Night Shyamalan’s The Visit. Colin explains that this time around they went about the casting process a little differently than in the past “On 100 Bloody Acres we went through casting books this time we went director to the actor, straight up and the actors were like ‘wait have I got the job?’ they were surprised that they were just being offered a job out of the blue. They get so used to having doing auditions and screen tests that when we called them up they were surprised. Some we didn’t even know, we had just seen their work and knew that they were what we wanted. The hardest for us to cast was the ‘baddie.’ We were three weeks out from the shoot and we still didn’t have someone, then this screen test arrived in our Inbox and it was Josh and we just knew. We felt that this was a guy that really understood the character that we were trying to make and he was a horror nut that was great as well. Olivia actually came to us recommended by our DOP, and it turned out she had just worked with M. Night Shyamalan, so yeah she was on her way up and we just managed to nab her at the right time.” Cameron quickly interjects with “With Sigrid though we made her audition seven or eight times… we just weren’t convinced she was right,” he laughs.

Also unique about Scare Campaign is that it was filmed in an actual disused asylum in country Victoria, but what many people don’t realise is that the cast and crew stayed in the asylum during the shoot which turned out to be a great bonding experience. “The thing with any shoot is that you tend to see the cast and crew become family,” says Cam.  “Every more so on this one because we were all staying in Beechworth, which is about 3-4 hours out of Melbourne,  so yeah we spent nights at the pub with each other, the Art Department had a particularly fun time stalking through the asylum after hours spooking themselves. It was a fun atmosphere but there was also work to be done of course. Funnily enough the guy doing security for us had actually previously worked at that asylum as a psych nurse so he would take the cast and crew through the asylum on these ghost tours after midnight. Places you probably shouldn’t go.”

To finish off the interview I ask Colin to describe what kind of horror Scare Campaign is. “Look it’s a lot of different things really, but really it’s a psychopathic Hitchcockian murder rampage… it’s a celebration of horror. It’s all things horror,” he says with a laugh.

Scare Campaign is out now on DVD through Madman Entertainment.