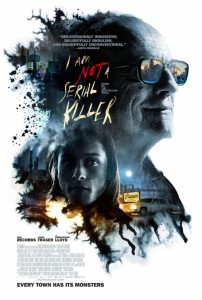 Summary: In a small Midwestern town, a troubled teen with homicidal tendencies must hunt down and destroy a supernatural killer whilst keeping his own inner demons at bay.

OUR I AM NOT A SERIAL KILLER REVIEWS & RATINGS:

Horror films have got decisively smarter over the years. The old school slice ‘n’ dice slashers that wowed audience in the 1980s and 1990s seem alarmingly redundant as horror film makers have discovered what really scares an audience is a film that can really get inside the head of those watching it and give them a good psychological scare. That is certainly the case with director Billy O’Brien’s (Isolation) new film I Am Not A Serial Killer which gets inside you head as a good psychological thriller and then delivers a special twist for all horror fans out there.

Set in a small American town I Am Not A Serial Killer centres around sixteen year old John Wayne Cleaver (Max Records – Where The Wild Things Are), a teenager who is obsessed by serial killers, works as an embalmer with his mother April (Laura Fraser – A Knight’s Tale) and has been diagnosed as a clinical sociopath by his therapist Dr. Neblin (Karl Geary – The Burrowers).

John fights against his urges to kill by doing small things like smiling at people who make him angry and helping out with those less fortunate than those around him, like his elderly neighbour Crowley (Christopher Lloyd – Back To The Future). However when a spate of murders start happening in the town it sparks John’s interest and he wants to try and find out exactly who is doing it.

Anyone out there who wants to learn how to write a great screenplay should start by sitting down and watching I Am Not A Serial Killer. Billy O’Brien teams up with Christopher Hyde (Last Light) to create an amazing script based on the novel by Dan Wells. When the two took on this challenge it was no small feat. While the novel was considered a young adult novel, it was a film that had to be different to other young adult films like Harry Potter or The Hunger Games. While many were impressed by the ‘darkness’ of The Hunger Games this film has to go even darker and it explores going inside the head of a teenager who every day fights the urge to kill those around him.

Somehow O’Brien and Hyde manage to achieve this goal and they create a film that is part psychological thriller, part coming-of-age film with a little twist of horror. Not only do that but they manage to make this a film with believable dialogue and even make the young sociopath a character that the audience want to root for as he sets about trying to solve the murders that are terrifying the town. The realistic dialogue just adds to the naturalistic feel brought to the film by cinematographer Robbie Ryan (Philomena), a feel that is quite common in British cinema but but still matches this film’s American scene well.The screenplay also shows his hand as a great psychological thriller as it keeps its audience guessing – first of all to who is committing the murders and even after that is revealed the film doesn’t lose any of its suspense as it becomes a game of cat and mouse between an experienced serial killer and teenager who dreams about doing the same.

As this film is guaranteed to become a cult classic as the years go by this is also going to do for young Max Records’ career what the film Brick did for Joseph Gordon-Levitt. Watching this film you would never pick that this is the little boy from Where The Wild Things Are and instead he has turned into a fine character actor who deserves to be winning awards for this film. He brings the role to life amazingly well and never seems out of his depth not even when in scenes with the very experienced Christopher Lloyd who is also playing against type.

Despite having a limited release in Australia I Am Not A Serial Killer is one of the best films of 2016. This gritty film is enough to show just how strong the British indie scene as this is one of the best psychological thrillers to surface since Prisoners and Nightcrawler. This is an amazing film that is not to be missed.

This gripping low budget psychological thriller mixes the familiar coming of age themes with outright horror tropes and a touch of the supernatural.

Sixteen-year-old John Wayne Cleaver (played by Max Records, the misunderstood young hero from Spike Jonze’s Where The Wild Things Are) is a troubled adolescent, a misfit with a morbid fascination with death and serial killers. He is something of an outsider, and he has written school essays on notorious serial killers like Jeffrey Dahmer and the BTK killer, which concerns his principal. He works as an embalmer with his mother April (Laura Fraser), a morgue technician, at the family funeral parlour, and this feeds his fascination with death. He has been diagnosed with clinical sociopathy, but he is able to keep his dark homicidal urges at bay through regular therapy sessions with Dr Neblin (Karl Geary). He has established his own set of rules to keep these killer thoughts at bay. He also does good deeds to help his elderly amiable neighbour Mr Crowley (Back To The Future‘s Christopher Lloyd) and his invalid wife.

That is until a vicious serial killer begins leaving a trail of bodies behind in his small home town. Mysterious black sludge is found at the scene of the murders, and it appears that the killer is harvesting the organs of victims. John investigates and soon discovers the identity of the killer. But rather than go to the police with the information he tries to catch him. In doing this he puts himself and his family and a few friends firmly in the crosshairs of a killer.

The film is based on Dan Wells’ best-selling YA novel from 2009 and has an unusually darker sensibility for a piece of teen fiction. The director is Billy O’Brien (Isolation, etc), who has a strong visual style and creates an unsettling atmosphere and slowly mounting air of dread and suspense. He doesn’t pull his punches with the darker themes and there are some gruesome moments that are not for the squeamish. The body count rises and the film gradually grows darker in tone. But there are also some rather black moments of humour interspersed throughout the narrative to leaven the tone.

Like The Town That Dreaded Sundown and David Lynch’s bizarre Blue Velvet, this creepy thriller strips away the veneer of small town America and finds something nasty and sinister just below the surface. Irish cinematographer Robbie Ryan (Fish Tank, The Angels’ Share, etc) has shot the film in 16mm, which adds to the gritty visual style and the moody atmosphere that captures a distinctly 80s aesthetic. Ryan’s cold and crisp cinematography captures the subtle menace of this small town and its harsh wintry vistas and John’s somewhat bleak world view. O’Brien gives us a strong sense of place and we can almost feel the chill from the snow covered environment.

The film boasts some solid performances. Records is well cast here as the obsessed teen, a junior version of Dexter with his obsessions and quirky behaviour, and he holds our attention throughout the film. He brings a disconnected coldness and lack of empathy to his performance. His name is an intriguing mixture of both John Wayne the iconic American film star and hero, John Wayne Gacy the notorious serial killer, and Beaver Cleaver, the all-American kid from the 50s television show. In one of his best performances for quite some time Lloyd brings subtle nuances and a creepy element to his performance as the seemingly kindly old neighbour. Fraser brings a sense of compassion to her role as John’s mother who seems protective of her son even though she doesn’t understand him.

I Am Not A Serial Killer undergoes some surprising and unexpected shifts in tone, moving from teen friendly murder mystery to darker territory. This clever and engaging thriller is perfect fodder for late night screenings, and could possibly become something of a cult film in the future.