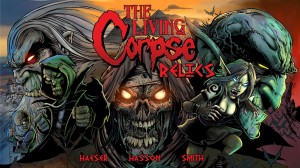 We’ve seen bands and filmmakers reach out to their fans through crowdfunding as a way to get a project completed. Now the creative team behind the popular The Living Corpse comics have decided to do the same to make their follow-up – The Living Corpse: Relics.

We did a little email Q&A with co-creator Buz Hasson so we could find out how fans can get involved.

Buz, I’d love to start off by asking when did you fall in love with comics and graphics novels? Can you remember what the first one was you read? What were your favourites while you were growing up?

Buz: For me it was anything I could find…..growing up in the 80’s you’d have to find them on corner stores, newsstand editons…which were always tough to get in consecutive order…but I was always drawn to comics ever since seeing Spiderman on the electric company as a kid, when I saw one day on  the news stand him in a black costume I freaked…ever since then comics were always these tombs of undiscovered potential.

When did you decide that you wanted to create your own graphic novels/comics?

Buz: I started drawing young but once I started to read and get into Sunday comic strips….like Outland, Calvin And Hobbes they became these wild plains of existence….shows like G.I.Joe and having the story carry over into the comics….playing Dungeons And Dragons…I knew I was headed to making a mythology someday of a character I could say I was involved in and one that fans would jive with.

Take us right back to the start how, did the original idea for The Living Corpse begin?

Buz: Ken and I wanted to do a zombie comic….Walking Dead had just started as a comic no show yet…we were already super fans of all the 80’s stuff from George Romero’s Night Of The Living Dead films, all the follows up…Day, Dawn, Return Of The Living Dead too with the comedy and punker feel….there wasn’t alot of zombie stuff yet like nowadays….we sort of had this idea about a corpse…and his story…like from his perspective.

For the young artists and writers out there tell us a little bit about how difficult it is to get the concept of a comic to the actual page and then onto actual shelves? What kind of steps do you have to take and what kind of time frame are we talking about? Did you have to go through much of a pitching process?

Buz: I’d say before you pitch anything the best business card you can give someone is your own book. learn the format…and find your style, technique for making sequential art. practice drawing everything you can or specialize and focus on one thing you’re into…

Buz: This is the third part of our original concept….we made it up awhile ago….we wanted to really expand the scope of the universe….because it’s a wise cracking zombie good guy so anything goes!

You’re turning to Kickstarter this time around to help out with project. What made you decide to use Kickstarter?

Buz: It started to just become necessary, we’ve been seeing a lot of A list creators go that route to sort of fine tune the process….we did a lot of research and thought October was a good time…we had been working on this series for a few years slowly but surely so we’re asking fans to chip in and join in on the process.

We see a lot of bands and filmmakers using Kickstarter these days what do you believe is the advantage for an artist to use Kickstarter and do you think this is the way of the future?

Buz: I do think it’s the future and it’s going to expand. seeking finances on a project can be more than challenging so it’s kind of an all in one concept….we’ve really outdone ourselves with ours…tons of cool stuff to get as reward for backing the project.

If people pledge towards The Living Corpse: Relics on Kickstarter what kind of packages do you have in return?

Buz: Corpse everything! masks, magnets, shirts, buttons, stickers, our documentary on VHS! who doesn’t need more vhs tapes?! haha check it out the list is pretty amazing and click on the campaign tab to see all the new art and reward pics.

Buz: Right now Kickstarter is where its at!