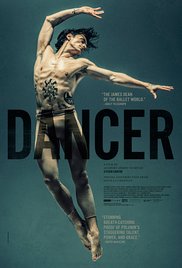 Summary: Sergei Polunin is a breathtaking ballet talent who questions his existence and his commitment to dance just as he is about to become a legend.

Lovers of classical ballet and dancing have been well served recently with a number of documentaries about famous choreographers and dancers, and there is the wonderful animated film Ballerina due to hit cinemas shortly. In the meantime we have this documentary about Ukraine-born ballet dancer Sergei Polunin, a prodigiously talented dancer who was at one stage hailed as “the new Nureyev.”
This profile from director Steven Cantor (Chasing Tyson, etc) follows Sergei’s career and unfolds in largely chronological order. Dancer is not the first documentary about Polunin as he was the subject of the 2013 short 11 minute documentary The Fragile Balance, from Jem Goulding.

This documentary is an exploration of the artistic temperament, the creative process and the pressures artists feel. It follows him from a very young age, through his meteoric rise to the top and his decision to walk away from it all at the height of his fame. The film highlights the extraordinary passion and talent and the dedication it takes to rise to the top in such a demanding and competitive profession.

From the age of eight it was obvious that Polunin was a naturally talented dancer. His parents made numerous sacrifices in order to ensure that the youngster was able to fulfil his potential. They worked hard to allow the talented youngster to study at Kiev’s prestigious but expensive choreography school. At the age of 13 he auditioned for the Royal Ballet in London and was accepted. But his mother, who accompanied him to London was denied a visa, and he was largely alone.

At the age of 19 became the youngest ever principal dancer for London’s Royal Ballet, and he became ballet’s equivalent of a rock star. But he felt trapped by the adulation and his quick rise to fame, and walked away from it at the age of 22. And he soon became the bad boy of ballet, with the troubled prodigy making headlines for his rebellious behaviour and addictions to drug and alcohol. His body was also covered in tattoos, another act of rebellion. His bad boy reputation meant that no ballet company would offer him a position. He returned to Russia where he headlined a reality tv show about dance, which was a waste of his talent. Then he worked with choreographer and mentor Igor Zelensky, who briefly re-energised his passion for dance.

Polunin’s final dance was for the video Take Me To The Church, which was filmed by David Chappelle and highlights his creative genius and lithe movements. When posted on YouTube it went viral.

Cantor spent five years working on the film and has assembled an extensive a collection of archival footage, home movies and videos shot by his mother, performance footage, newspaper headlines, and candid interviews with some of his peers. This is a fairly sympathetic portrait of the troubled artist as it glosses over much of his bad behaviour and doesn’t offer up too many negative opinions.

Other Subculture Entertainment Dancer Reviews: You can also listen to our Dancer review on The Good The Bad The Ugly Film Show Ep #206