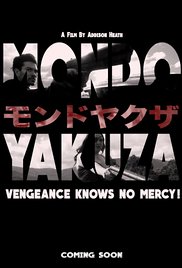 One of the hit films to premiere at Monster Fest 2016 was the brand new cult film Mondo Yakuza. Now it has been announced that the film will be released on DVD on January 11th, 2017. Subculture Entertainment’s Dave Griffiths caught up with the film’s director Addison Heath to have a little chat. Addison chats about how he goes about shooting films such as this in Melbourne and how he went about the casting Skye Medusa as the delightful Cassidy Arizona.

You can listen to or download our Addison Heath interview right here.