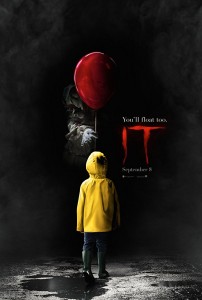 Summary: A group of bullied kids band together when a monster, taking the appearance of a clown, begins hunting children.

OUR IT REVIEWS & RATINGS:

Horror fans have had a bit of a mixed bag over the last couple of years. Films like Lights Out and Don’t Speak seemed to suggest that production companies were starting to realise that mainstream horror fans wanted a little bit more grunt when it came to the horrors that were hitting cinemas screens. But then came Annabelle: Creation and Get Out which went back to the tired old, too lame, too tame style of mainstream horror that had been disappointing horror fans for years. It was almost a toss-up on what the remake of Stephen King’s classic tale It would be. Would they take it down the tame horror lane or would they want to take a chance and really impress fans. The good news is that the latter is the case as director Andy Muschietti (Mama, Historias Breves 3) brings back a welcome dose of nastiness to mainstream horror.

This version of It is told through the eyes of the children of Derry. Headed by Bill (Jaeden Lieberher – St. Vincent, Midnight Special) whose younger brother Georgie (Jackson Robert Scott – Skin, Criminal Minds) is the latest child to go missing in the town a group of youngsters starts to piece together the puzzle that has been haunting the town for generations. Bill wants to spend the summer with his friends searching for Georgie and dodging the local bullies but when the troubled Beverly (Sophia Lillis – The Garden, 37) starts to have some terrifying experiences that they can all see and the new kid in town Ben (Jeremy Ray Taylor – Ant-Man, Alvin And The Chipmunks: Road Chip) delivers his theory about an evil hitting the town every 27 years all the pieces of the puzzle starts to fall into place.

Soon it becomes obvious that a deadly clown called Pennywise (Bill Skarsgard – Simple Simon, Atomic Blonde) is behind everything and the group of friends which also includes Richie (Finn Wolfhard – Stranger Things, Sonara), Mike (Chosen Jacobs – Cops And Robbers, Hawaii Five-O), Eddie (Jack Dylan Grazer – Tales Of Halloween, Beautiful Boy) and Stanley (Wyatt Oleff – Guardians Of The Galaxy, Once Upon A Time) have to overcome their fears and face them head on.

To be honest we probably haven’t seen a director take such a chance with a remake since Rob Zombie worked his magic on Halloween. With It Muschietti has delivered a completely different film to what we have seen with any adaption of It previously. He takes Stephen King’s tale and turns it into a coming age of film… and a damn fine at that. These kids aren’t your stereotypical ‘film kids.’ First he’s got kids that aren’t your average ‘child model’ actor and then has them speaking the way you would expect them to, yes parents kids do use the f**k word, and has given them each their own unique personality, which comes in handy as their fears come to the surface, rather than just simply having all the kids act exactly the same way. And while I’m sure some critics will question the scene with the kids sitting around their underwear but to me it brought a real natural feel to the film.

That natural feel also comes through in other ways throughout the film. Going back to the novel and giving the main character a stutter again makes the film feel incredibly natural and the fact that the team of screenwriters who worked on the film also saw fit to bring in controversial storylines such as child abuse only grounds the film even more in the real world. It would have been very easy to give the kids simple fears such as spiders and what not but to take it that step further and actually introduce things, like child abuse and bullying, that sadly some kids have to go through in their lives is something that not many people would have expected the script to have done.

Of course the best part of what Muschietti has done with this version of It is to remember that he is actually making a horror film and that it is more than okay to actually deliver some horror. Yes there are confronting moments of teens having to get violent with baseball bats, but realistically what are they to do when they are going into battle evil. Muschietti also doesn’t fall into the trap that so many horror filmmakers do and decide to rest his laurels on jump scares to get at his audience, instead he creates truly horrific moments that are really going to impress the hardened horror fans out there.

When looking at the cast you just have to say that the kids do  an amazing job as an ensemble. Having said that though Jaeden Liebehrer and Sophia Lillis do put in performances well and truly beyond their years though. Aside from the terrifying scenes with Pennywise these two youngsters have to conjure up the emotions that a teenager would be feeling after losing a sibling or being sexually abused by their father. No doubt both actors had to go to some pretty dark places in order to tap into that and both need to be congratulated. Billy Skarsgard also does an amazing job playing Pennywise and hopefully if they are able to do the sequel set twenty-seven years into the future that they are able to retain him.

Andy Muschietti has delivered one spectacular horror film with It. The harshness of the horror will keep fans happy while the characterisation and coming-of-age storyline is a welcome change to what could have been. Group that together with a great soundtrack, sadly no Pennywise on it though, and what we are left with is a horror remake that far exceeds what anyone expected for it.