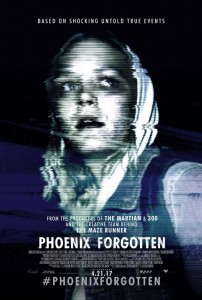 Some actors, for one reason or another, are forced to direct films outside of their personal interests or preferred genre. Have you been lucky enough to only work within the genre, and your preferred type of film?

I wouldn’t say I have a preferred genre in terms of film.  I love drama, because you have a lot of emotional rope to play with.  I love comedy because it’s so much fun –  I trained at UCB and the Groundlings and I like playing and improvising and making people laugh.  And the last few features I’ve done, Like Phoenix Forgotten, have happened to be horror films, or at least had a horror element to them.  It just worked out that way – and I also happen to be a horror fan, both as a viewer and as an actor.  I love movies like Peter Jackson’s early film Dead Alive.  Shaun of The Dead is another favorite, and  I loved this year’s Get Out and Ingrid Goes West (which I would totally describe as a horror movie though I realise that’s contentious!).  In horror movies the stakes are heightened – and that’s a really fun world for an actor to work in.  And I think the best horror movies have moments of both comedy and drama – so you get the best of both worlds.

How soon before filming did you get involved?

I had worked with Justin Barber (our director) and T.S. Nowlin, our writer, on some other projects prior to this one, so I was lucky enough to be involved with this movie right from the initial test shoot.  I didn’t know if the project was going to get to be made into a feature, and I wasn’t sure if I was going to be able to even audition for the role I ended up playing, there are always so many variables in the process of making a film.  Obviously in the end I did get to audition and it worked out for me! I’m very grateful I got to be a part of the film from beginning to end, that was a really special part of this experience for me.

How long has it been since it was completed? Was it an anxious wait for the release?

Going into this project the goal was for it to feel like you’re watching a documentary my character, Sophie, has made about her brother’s disappearance.  So we had a great script that our director Justin Barber co-wrote with our writer, TS Nowlin (who also wrote The Maze Runner Trilogy).  But going into pretty much every scene we also improvised a version of it – so it felt like real moments from real people.  This meant that the film changed a lot as we made it – because obviously in improvising you’re not planning what you’re saying, and you’re finding new stuff on the day.  In a documentary you never know exactly what you’re going to get – you shoot all your stuff and you sift through and it all comes together in the edit.  However, with a real documentary you just have to use whatever you end up with after you film – if you are making a narrative feature you get to go back and shoot anything you feel like your story is missing later on!  So we had a couple of re-shoots right up until right before the release date – I think it was a month or so.  I had already seen a couple of cuts of the film so I wasn’t anxious – just excited to see it come out.

Did it turn out as you envisioned it would?

Because in a way we were approaching this film as you would a documentary, that set a really high bar for our acting.  Approaching this role I felt really committed to being grounded and subtle and making sure Sophie felt three dimensional and believable.  One of the things I think is so cool about this film is that we weave fact and fiction together – there are actual real people in the film who we interview about some of their real experiences.  So personally my goal was to live up to the example set by the wonderful moments we got out of our real interview subjects.  I was lucky enough to be surrounded by a great cast and I think everyone did an amazing job – so yes, in that sense I think what came out of that is a movie that feels like the real doc my character would have made, and that’s what I had hoped for and envisioned going in.

Were any scenes of yours lost in the editing room? Any moments you remember filming?

My character initially had a love interest, who was the brother of one of the other kids who goes missing.  Dan still made it into the movie but he and Sophie didn’t end up getting their walk off into the sunset together –  which was the ending of an earlier edit!  Sorry Sophie!

I can take zero credit for that – that was not my department.

Do you get to approve stills that you feature in?

I think so?  That wasn’t a huge issue for me on this one.

Have you been lucky enough to work with a filmmaker that involves you in the entire process – right up until release?

Well this project was an especially collaborative one.  Not only with all the research and preparation we all did separately and together, and the collaboration and improv on set, but usually you don’t get to see initial edits and stuff on a project like this.  With this film I got to see several cuts before the final version, which I actually love.  Some actors don’t like watching themselves but I kind of feel like it’s like an athlete watching tape of themselves swimming or playing football or whatever – I like watching it with an analytical eye and seeing what went right and where I can do better.  I’m a weirdo like that!  I will say though, I also like seeing the film by myself first, before I watch my giant feature film sized face in a theater in front of everyone I know.  Just so if something didn’t come out how I wanted I can work through it in my alone time and then watch it in public without feeling traumatized.

I love the accessibility of VOD, and I think in terms of movie watching, it means I’m more open to watching something I maybe wouldn’t necessarily risk trying out in the theater.   But you can’t beat going to the movies.  To me there’s nothing like sitting in the dark with your buddies, with your popcorn, all experiencing the same thing.  I think VOD encourages a solo viewing experience, and I think going to the movies makes it a group experience, so that’s the difference for me.  I think there will always be a place for movie theaters, for just that reason.

It’s no secret less people are going to the movies, so it looks like it’s headed in a digital direction.  I can see moviegoing becoming more of an event-movie only thing – we only go see the big budget marquee movies in the theaters and we save the little indies, and the smaller comedies, and the more subtle dramas for watching at home.  But that does make me sad.  I think seeing films on that big screen with great sound – no matter the movie, that’s the environment the filmmaker was hoping you’d see it in – you’re seeing it at its best.

Do all these extra channels and platforms open doors for actors? More work?

Well it seems like VOD has ushered in this amazing time for television we’re experiencing now.  I think shows that might previously have a more niche audience or might not have rated well on Network Television – the audience for that stuff now has easier access to it.  So yeah there are new outlets, which means new shows, and I also think shows have the potential to stick around longer, which is all good for actors.  And my theory is that it’s good for filmmakers too – there’s far less cost associated with digital distribution than there is with a theatrical release.  So this is by no means based on expert knowledge perhaps it becomes easier for a “riskier” film to get made – you can make it for less money and there’s also less pressure for it to succeed at the physical box office.

What was that great found-footage alien movie that famous actress Florence Hartigan was in? 😉