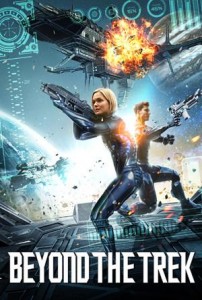 Beyond the Trek, available on VOD this week from Screen Media, was inspired by an article about human genetic modification, explains writer/director Ian Truitner.

I’ve been fortunate to work mostly within genres that I love. Sci-Fi is my favorite genre, so to have been able to make one was a phenomenal experience. Sci-Fi is the land of limitless possibilities, so the imagination can really run wild without being burdened by convention or preconception.

The concept for Beyond the Trek began in 2013 based on an article I read about human genetic modification, which, by the way is no longer science fiction but is actually happening. Financing was attached, plus the production company had a sound stage, but since the budget was limited we had to be very creative with how we put everything together. As an indie film, one has to use intriguing themes and suspense rather than expensive special effects.

Not long. Beyond the Trek had its premiere at Sci-Fi London Film Festival in spring of 2016, and was officially released in the UK in January 2017 under the title Deep Space.

Yes, very much. There are nearly always variables that force a deviation from the original concept, sometimes creative but mostly budget limitations. However, if one read the first draft of the original script it wouldn’t be much different than the film overall.

The first rough cut came in at about 100 minutes and the final version is 90 minutes. Cuts were made mostly for pacing, but didn’t remove anything critical to the plot.

Most definitely when it came to festivals. Not so much on the international side as the distributors know their own markets. The name has been changed numerous times. It started as Teleios, but has since been renamed Deep Space, Teleios: Enlose Angst and Beyond the Trek.

Not approval, but I was asked what my thoughts were. Fortunately I loved the poster the sales rep came up with!

Screen Media has been awesome. They’ve taken the time to listen to my thoughts and suggestions and I’ve been in regular contact with them.

It’s a Sci-Fi film, so it’s definitely played very well to fans of that genre. I was surprised that some people found a spiritual element in the film as well. Overall, I’m hoping the film stands up as just a solid film with interesting characters and themes regardless of genre preference.

VOD or theater. Where, if you had your choice, would you prefer your movies – not just this latest one, but all of them – be seen? Beyond the Trek had a phenomenal festival run, screening in theaters around the world and winning over a dozen awards. Though I would have preferred a public theatrical release since the film is very immersive on the big screen, I feel the festival screenings compensated for that.

Currently big studio films with large marketing budgets are the only kind of films that profit from theatrical releases. I hope that changes and there is a indie film revival at some point, but the existence of multiple VOD platforms offering a lot of content conveniently streamed into your home or connected devise makes that unlikely.

It broadens the canvas to allow for more paint strokes, but a big canvas doesn’t necessarily mean the painting will be better. It’s great to have options, but the economics are pushing budgets of indie films significantly downward.

What is the only movie to explore the convergence of Artificial Humans and Genetically Modified Humans?

Tagged: Beyond The Trek, Ian Truitner