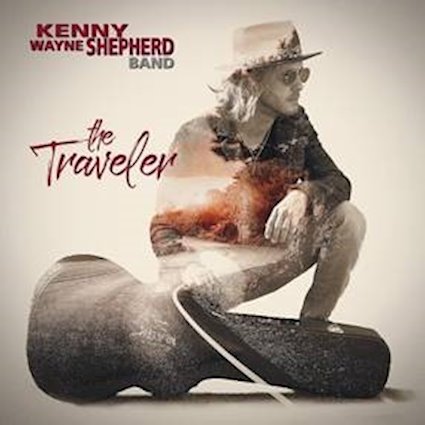 When you listen to a lot of musicians these days you realise that many of them have forgotten the art of great song-writing. Catch a brief listen to any pop radio stations and the tracks seem repetitive with vanity being the main song subject… the art of telling a story or capturing real human emotion in the lyrics seems to be something that is long forgotten. Well I am happy to say that one talented musician that hasn’t lost that art is Kenny Wayne Shepherd. His new album, his ninth, is an album full of tracks that will regain your faith in modern day music… because when it comes to song-writing this man really knows what he is doing.

The Traveler is one of those albums that you can’t just listen to once. Put it on and you’ll have it on repeat for days because it is one of those albums that is not only filled with great tracks but also an album where the lyrics really speak to you and remind you moments from your own life… yes the album’s premise might be able travelling but it is the listener themselves that is taken on the journey here.

Opening track ‘Woman Like You’ shows straight away that you are in for something special. It’s great mix of hard rock and blues shows the unique brand of music that Kenny Wayne Shepherd has made his own. The brilliant guitar playing and catchiness of the track just make it a track that you fall in love with straight-away.

That is a re-occuring theme throughout the album. ‘Gravity’ and ‘We All Alright’ are simply so catchy that you find yourself singing along to them on just the first listen while that infectious catchiness is also present on ‘Long Time Running’. Then there is ‘I Want You’ which shows why Shepherd is one of the best guitar players in the world.

What wins you over on this album though is the brilliance of his song-writing. The emotion that he captures in ‘Tailwind’ is something that is lost these days. The song captures that emotion of travelling back home after being away like very few songs have managed to do in the past. It is clearly one of the best songs of the year and a track that deserves to be heard on radio right around the world. A similar theme is also explored with some exceptional story-telling on ‘Take It On Home,’ another track that is just sheer brilliance.

The diversity of Shepherd’s music is on show as he covers Buffalo Springfield’s ‘Mr Soul’ with a brass heavy rendition and then delivers Joe Walsh’s ‘Turn To Stone’ in true blues rock fashion. The two are separated by ‘Better With Time’ which is just begging to be used on a soundtrack.

For fans of Kenny Wayne Shepherd it is easy to see that The Traveler is going to become a favourite, while for those that haven’t discovered his wonderful music – this will be the album that makes you go out and want to hunt down every album he has ever  recorded. Make no mistake this is one of the albums of the year.