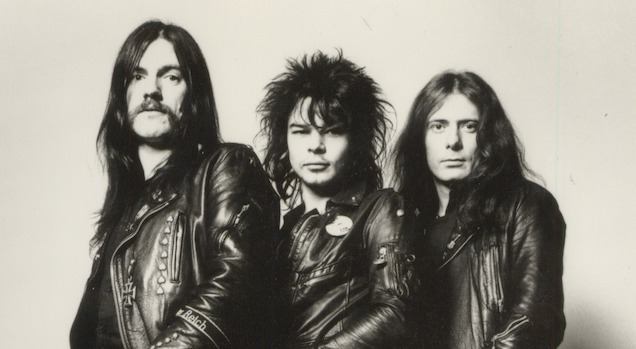 Motörhead. Do they need an introduction? Everything about these legends of heavy metal was iconic. Their logo, their look and their frontman.. the immortal Lemmy Kilmister RIP.

Motörhead and their music are part of the very fabric of rock n roll. It’s in the DNA that spawned countless sub-genres and inspired everyone from Metallica to the Foo Fighters.
In a career spanning over 40 years Motörhead became synonymous with pure excess. Sex, drugs and rock n roll. There was no ‘off stage’ with these guys, they lived it 24/7.

BMG Music are proud to re-issue all of Motörhead’s albums that were originally released via Germany’s SPV GmbH.

From the all out assault of the title track that opens 95’s Sacrifice, which was the last album to see Motörhead record as a four piece with Lemmy, Phil Campbell and Mikkey Dee joined by Würzel, to the reflective, almost ballad like Teach You How To Sing The Blues, on 2008’s Motörizer, these albums capture the band at their heaviest. Dee’s double kick repeatedly punches you in the gut and Campbell’s riffs are some of the most savage he ever penned. The instantly recognisable bass of Lemmy, which at times is more rhythm guitar than bottom end is ever present as is that snarl, the Kilmister bark that more than anything signals that you’re listening to Motörhead.

Then you have the live albums, Live At Brixton Academy, 25 And Alive, Better Motörhead Than Dead, they all showcase why Motörhead was a force to be reckoned with right up until the very end. Never was the spirit of Motörhead more alive than when they were on tour, shake, rattle and rolling audiences to within an inch of their lives thanks to that indomitable cocktail of power, purpose and head-crunching volume. Doctor Rock, Stay Clean, No Class, Killed By Death, Iron Fist, Bomber, Overkill, the timeless, Ace Of Spades and more are delivered with utter conviction and devastating accuracy.

During his recent time in Australia as part of the Download Festival, major Motörhead fan and Anthrax guitarist, Scott Ian recorded a special ‘unboxing’ video. Scott delves into some of the re-issues titles and recounts the classic story of how his ‘joking, off the cuff’ comment to his manager when asked to provide a quote for the liner notes of Everything Louder Than Everyone Else was actually used! Much to his horror and much to Lemmy’s amusement.

Grab your fill and crank them up high!
And if it’s too loud, you’re too old!
motorhead.lnk.to/SacrificeVinylPR

They were Motörhead, and they played rock n roll
imotorhead.com