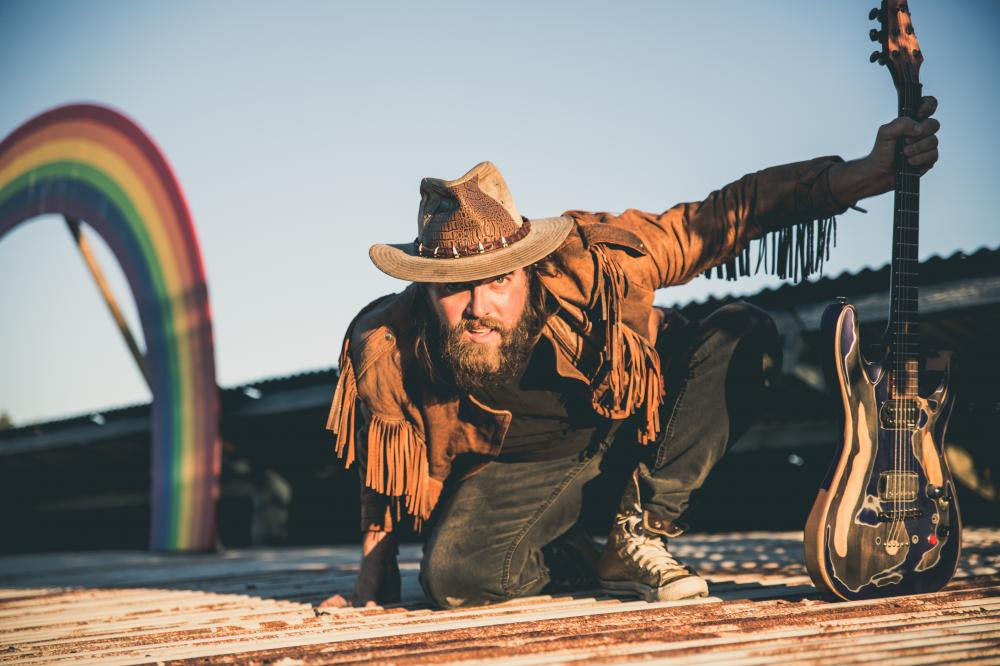 Swan is the brainchild of Matt Swan. A founding member of genuine worldwide rock phenomenon Royal Blood, “Swanny” is today announcing his debut release, an absolute hip-swinger of a single and video entitled “Sweat Baby Sweat”. The single will see the light of day in all digital outlets and streaming platforms from Friday July 5th.

The filmclip (produced by Clint Gough) for this high-octane belter comes in the form of a black-and-white clip where Swanny rescues a stranded woman with a broken down car and takes her for a ride on the back of his motorbike and then into the skies, as he then proceeds to skydive, all the while singing the 100-mile-an-hour, foot-to-the-floor track.

Swanny has been writing and recording this track and an entire batch of new songs just north of Byron Bay in his home studio – and this new track is the first to be released. “Sweat Baby Sweat” was mixed & mastered by Forrester Savell (Cog, Karnivool, Dead Letter Circus), produced by Matt Swan & Clint Gough (Like Thieves) and engineered by Nathan Stanborough & Bernie Wedrat.

Swan says that “Sweat Baby Sweat is simply about letting the good times roll live life to the max – life is one big party. It was written after a long hot Summer’s night of no sleep in Byron Bay in 2018. I had just got home in the early hours of the morning after playing drums at one of Byron Bay’s crazy warehouse parties – I picked up the guitar, cracked another beer and the main riff quickly came to me. I then laid down some drums and Sweat Baby Sweat was born.”

“These warehouse parties are famous throughout Byron Bay’s rock scene, they are a wild, hedonistic, sweaty mix of rock ’n’ roll and creativity. When it came time to lock down my lyrics I was still on a high from my experience that night so I wanted write this song as a homage to it. That night was hot and sweaty, the dance floor was full of people sweating as we rocked out. There was this one beautiful woman that I couldn’t take my eyes off, we locked eyes and it was like we were in a trance. Sweat was rolling off her body, i loved the way she moved and I loved the way she just didn’t care… Sweat Baby Sweat!”

A genuine Rock ‘N’ Roll Crocodile Dundee, Swanny grew up just north of Byron Bay in a small town called Terranora in New South Wales. Beginning his love of music at the age of 12, Swanny realised his passion and purpose in life had to be in the form of music – and began his journey as a drummer. Not long after, Swanny toured all around Australia and carried out drum workshops in remote Aboriginal schools, while gigging throughout the country towns and cities, before breaking away and moving to Nashville at age 21. His side project The Swamps have played at Falls Festival 2019 and for Margot Robbie’s Wedding (yes, you read that correctly) as well as supporting Wolfmother,
Omar Rodriguez, Kingswood and Stonefield to name a few.

Set the scene – it’s 2011 and Swanny met Mike Kerr in Brighton and the band ‘Royal Blood’ was born in March that year. The duo lived together and spent their time writing, recording and establishing Royal Blood as a band. Their first single was recorded at Rockfield Studios UK in 2011. The band decided to move to Australia in 2012 and recorded their first EP in Brisbane. “Come On Over” which was previously named “Leaving”, went to air on Triple J’s ‘Home n Hosed and the rest is history….

Swan’s debut single “Sweat Baby Sweat” will be released on Friday July 5 and will be available at http://ffm.to/swan_SBS.