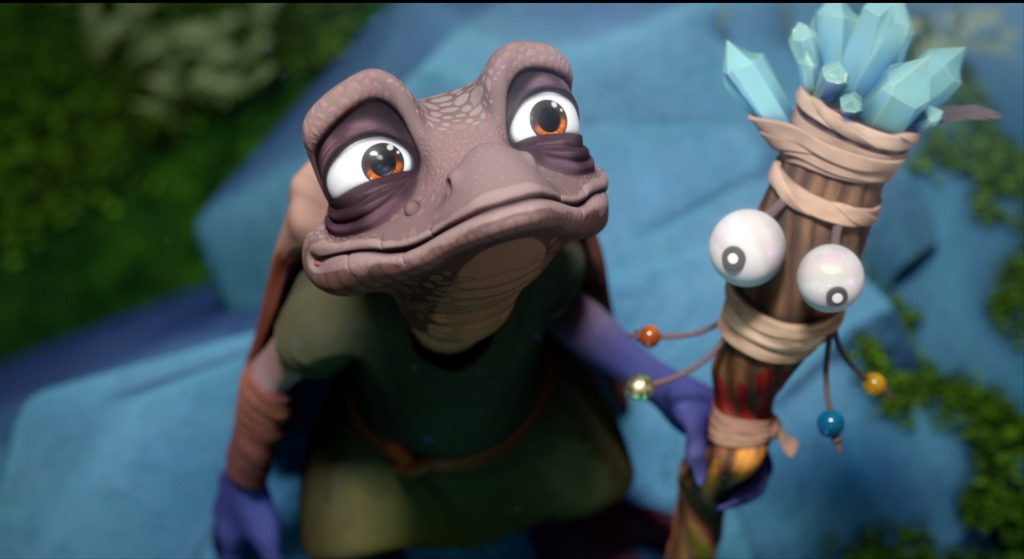 For most Australians Ross Noble needs no introduction. The talented comedian has become a staple on our television and radio. Perhaps not many people would know about Noble’s rising resume as an actor as well. I’m not talking about when he presented his own shows – but rather when his acted in horror films such as Stitches, Nails and The Circle.

Now however Noble is taking a turn away from horror and has instead lent his voice to a brand new family animation called Sanctuary City: The Wishmas Tree where he stars alongside Miranda Tapsell and Kate Murphy and he plays a frill-necked lizard… yes you read that right he plays a lizard.

As it turns out playing a lizard was one of the reasons why Noble decided to take up the role. “I literally got an email saying ‘do you want to play a lizard’ and I said ‘yes please,’” says Noble delivering his warm, familiar laugh down the phone line. “You can’t go wrong with playing a lizard, can you? So yeah, I then read the script and found it was one of those films where you find that it is a proper family film and it looked like a lot of fun. So I just replied to them and said ‘yeah I am in.’”

Of course playing a lizard is not an offer you get every day and here Noble gets the chance to play Yarra, a wise old sage who just happens to be a frill-necked lizard. “Well he is a lizard but he is sort of a kind of wise guy,” explains Noble. “He is the Obi-Wan, the Gandalf kind of figure in the film, but really kind of appealed to me was that he was a bit different. Normally the wise guy in a film, that is all they are, they are just wise. They are just there to be wise but what I liked about this script was the fact that Yarra is a little bit unhinged.”

That leads to both Noble and I laughing and when he continues he says. “You know he talks to his stick. It is just basically a stick with a face on it, but he talks to it. And because of that you don’t really know how reliable he is and because he is kind of old and a bit nuts. It really is a case where he isn’t just there for his wisdom, you find yourself asking ‘should we really be following him?’”

Anybody who has ever seen one of Noble’s stage shows knows just how good he is at lending his voice to any number of characters that he is impersonating but that still begs the big question of just how do you find a voice for a wise, slightly loopy frill-necked lizard?

“With the voice I wanted him to sound old and wise but because he is cracked I wanted to be able to take a left turn every now and then,” explains Noble as he gives me a bit of a taste of Yarra’s voice. “The great thing about it being animation is that you can try something else and you can try going crazy, crazy far. You can go much further than you think you could ever go and then the guys behind the glass can say ‘try that again but make it less insane’ or ‘you know what you can be more insane.’ So yeah, during that process I was just really going for and then they would look at it.”

“There was some stuff that they looked at and they were just rolling around going ‘really?’” he says laughing again. “But then once it is all put together it becomes something where you can choose the bits where you can say ‘yeah, he is properly helping this possum on the journey’ and then there are other times where you are like ‘I wouldn’t be trusting him.’”

The process though of finding Yarra’s voice was not easy though and Noble says he had to audition a few different voices for the creators of the film. “You kind of find the way you think he would sound,” he says explain the process to me. “And then you just play with it. We recorded a lot of stuff and it wasn’t quite right so we actually went back and re-recorded it. It was okay, but it just wasn’t quite right, because the thing is at the start of the film Yarra has to be sane – he is talking about the history and you know he is basically telling the story of the legend and that has to have some kind of authority to it but with what we recorded at first he was just a little bit too off the wall. We had to bring a little more authority to it and make it a little bit more steady. You do have to think about your performance but then you really just have to trust the guys that have created it.”

The guys that have created this film have certainly created something that is going to be very special for Australian audiences, so don’t be surprised if this film doesn’t become one of Australia’s next big hits.