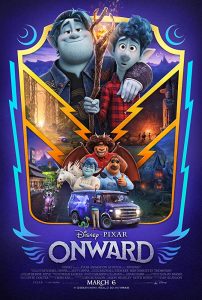 Summary: Set in a suburban fantasy world, two teenage elf brothers, Ian and Barley Lightfoot, go on an journey to discover if there is still a little magic left out there in order to spend one last day with their father, who died when they were too young to remember him.

Twelve months ago if you asked any film fan if they were excited about any animation films that were set to be released the answer most likely would have been a resounding ‘no.’  Hollywood was getting slammed from pillar to post because it felt that the animated films that it was producing where all mirror images of each other or just another instalment in what were becoming tired franchises.

Even the animation leaders Pixar were not immune from the backlash with many believing that films like Toy Story 4 and The Incredibles 2 were inferior films in what had once been brilliant film universes. The question seemed to be ‘why can’t Hollywood be making animated movies with the creativity being shown by their Asian counterparts?’

Well it seems like the Hollywood filmmakers were listening. Earlier this year we had the surprisingly creative Spies In Disguise starring Will Smith and Tom Holland and now Pixar has just released one of the most intriguing films of the year – the very creative Onward which again stars Tom Holland (Spider-Man: From Far Home) this time alongside his Marvel universe co-star Chris Pratt (Guardians Of The Galaxy).

Together they voice Ian (Holland) and Barley Lightfoot (Pratt). Two teenage elf brothers growing up in a land that resembles The Shire from Lord Of The Rings but also contains all the modern day suburban comforts that you and I are used to in everyday life. It is those modern day comforts that have led to serious issues though for the inhabitants of the land that the Lightfoot’s call home. Technology means that the ancient magic of the wizards of that has been long forgotten, while characters like pixies and fairies have even forgotten what their wings are for.

Some people live in hope though. Barley preciously lives the lives of his ancestors through this dungeon and dragons style role-playing games while at the same time trying to look after Ian and their mother Laurel (Julia Louis-Dreyfus – The Seinfeld) who was left a widow after the death of her husband shortly after the birth of Ian.

The two boys have always wondered what their father may have been like but nothing prepares them for what happens on Ian’s sixteenth birthday when Laurel gives them a gift their father had prepared before he passed away. The staff that he leaves them tells them he was in fact a wizard and the spell that goes with it allows them the opportunity to bring their father back for a day. However, when Ian only manages to bring back half of their father (his legs) he is forced to team up with Barley to go on an odyssey that will see them have to revert back to the ways of their ancestors before them.

Onward is like nothing Pixar has ever created before. Director/screenwriter Dan Scanlon (Monsters University) has delved deep into his creative bank to create what could be loosely described as a ‘stoner’ film for families. While the film’s plot does at times feel a little light on you can’t help but fall in love with it as it introduces you to characters and a world that you simply just want to know more about.

While they are elves most audience members will find themselves drawn to Ian and Barley from the very beginning. There is something so natural about Ian – a young boy who feels that part of his identity is missing because he never knew his father and Barley – an almost lost teenager who society frowns up because of the energy that he puts into his faithful van and his path of discovering the lost arts of those that came before him.

As a filmmaker Scanlon doesn’t allow Onward to become a lazy film because of its supernatural elements either. No amount of great visual effects can ever make up for the connection that an audience can get from well-rounded characters. Here that connection is made straight away and throughout the film Scanlon plays on that garnishing suspense from putting the loved characters in peril  while also allowing a more emotionally touching side of the film to shine through as the characters learn some valuable morals revolving around what they are going through as a family. Scanlon also weaves some true comedic moments into the film with some great sequences featuring Ian and Barley’s battle with the biker pixies and their distrust of their mother’s boyfriend Officer Colt Bronco (Mel Rodriguez – Little Miss Sunshine).

Perhaps the biggest weakness of Onward is the fact that Scanlon at times seems to make the brother’s quests just a little too easy to overcome, something that seems to be highlighted even more so due to the fact that the world the boys live in is so interesting that you can’t help but feel you want to see more of it and know more about it.

Still at the end of the day this is the kind of animated film that audiences have been waiting for. To be honest it is kind of unexpected that Pixar would deliver a film that seems to have a Gothic edge while embracing the quirkiness of a film like Planet 51, but they have and it works wonderfully well. Many asked for more creativity when it comes to the kind of animated films that we are singing in cinemas and if a film is like Onward is anything to go back it looks like that request has well and truly be delivered. Onward is the kind of film that can be enjoyed by family members of all ages – so sit back and enjoy a little bit of Pixar magic.

Our Onward review that appeared in ‘The Phuket News’ can be read at this link – https://www.thephuketnews.com/onward-puts-animated-movies-back-on-track-75875.php