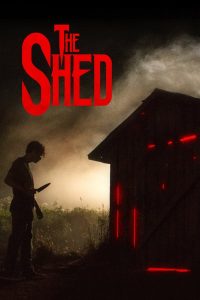 Summary: A teenage boy has his life turned upside down when he is forced to trap a vampire in his shed. 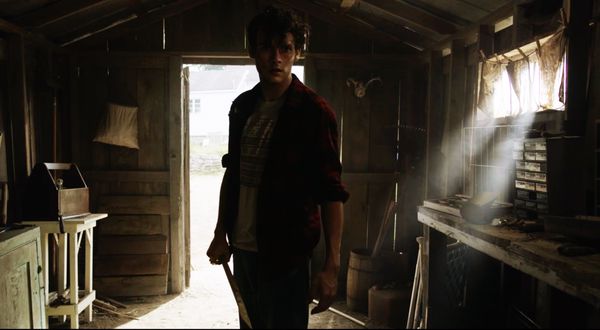 OUR THE SHED REVIEWS & RATINGS:

There is absolutely no doubt that there have been some amazing vampire films made over the years. For many horror fans films like The Lost Boys have become perennial favourites while films like Daybreakers have also been enjoyed by those who don’t mind digging a little bit deeper for their cinematic poison.

Then came the Twilight phenomenon and suddenly it felt like every single studio were falling over themselves to try and flood more vampire films onto the market. For the most part the films were formulaic and to be honest it felt like nothing fresh had surfaced in the vampire genre for quite a long time – but now comes The Shed, a film that proves that there is still a lot that can be done with fanged villains as the main focus.

Actually it is probably the fact that the vampire itself is not the main focus that makes Frank Sabatella’s (Blood Night: The Legend Of Mary Hatchet) The Shed such a great watch. The story itself actually centres around Stan (Jay Jay Warren – Day Of Reckoning) a high school student who is on his last legs with the Police and is forced to live with his verbally abusive Grandfather (Timothy Bottoms – Elephant).

While he tries his hardest to stay out of trouble it is not made easy when he and his best friend, Dommer (Cody Kostro – Instinct), are constantly bullied by other students at the school. Then there is the strange on-again-off-again friendship with his crush, Roxy (Sofia Happonen – Woman Of A Certain Age).

But all of that pales into significance when local-man-turned-vampire Bane (Frank Whaley – Pulp Fiction) is captured in the shed at the bottom of Stan’s garden. But as Bane begins to kill anyone that happens to go into the shed Stan suddenly realises that it is going to appear like he is a killer and he has to try and keep the body-count secret from Sheriff Dorney (Siobhan Fallon Hogan – Men In Black).

What makes The Shed such a great watch is the fact that the film is written in such a way that the plot feels very realistic. Despite the rough edge to him Stan is a likable character, especially when the audience is shown just how his Grandfather speaks to him. While of cause the presence of a vampire does push the film into the horror fantasy realm the situation that Stan find himself is very realistic. To the outside world he is just a bad kid – they know nothing about the abuse that he suffers at home. The fact that he feels like he is going to get the blame for what is going on is something a lot of teenagers would feel as trouble happens around them.

The screenplay, which was also written by Sabatella, also takes the film into more interesting areas as it explores the notion that one character wants to use the vampire as a way to kill his enemies. It is a dark topic to explore, but one so brilliant that it is hard to believe that more screenwriters haven’t thought of it over the years. That screenplay also shines when you realise just how natural the lines seem between Stan and Roxy and the tension that is raised when Stan has to hide the crimes. That and of course once Sabatella shows graphically that no one is safe from Bane you also start to wonder just who is safe and who is not.

Credit must also be paid to Jay Jay Warren who does an amazing job bringing the character of Stan to the screen. His performance matches the natural feel of the film and it is easy to see that he is going to become a star. His portrayal of a damaged young teen pushed to the edge is absolutely stunning.

There is just so much to love about The Shed. This is a film that every hardcore horror fan needs to see. From its creative and original plot through to the work of a director that announces himself as one of the filmmaking finds of 2020 The Shed is a must see film that is a real breath of fresh air.

Other Subculture Entertainment The Shed Reviews: