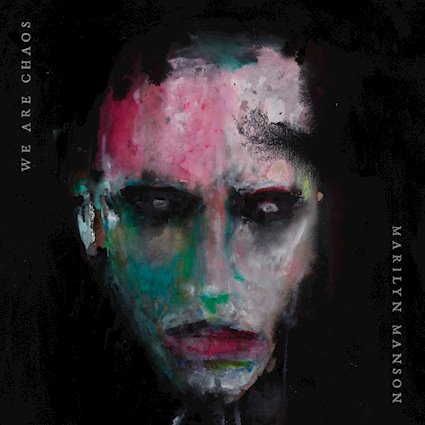 Album: We Are Chaos

4. Paint You With My Love

8. Keep My Head Together

I still remember the first time I ever heard Marilyn Manson. While at High School a friend slipped me a mixed tape that contained a couple of Manson’s tracks. One was “Irresponsible Hate Anthem” and suddenly I had discovered another artist that seemed to be turning my diary entries into music.

Of course like all Manson fans I weathered the storm of the whole ‘he’s not really heavy… you shouldn’t be listening to him’ crap and to this day I still believe that Holy Wood (In The Shadow Of The Valley Of Death) is one of the greatest alternative albums ever made and I even have a soft spot for his more commercial The Golden Age of Grotesque.

Now comes Manson’s new album We Are Chaos and yes it seems even twenty-five years down the track Manson is still an artist that knows how to capture the mood of the world in an album. This isn’t just an album to listen to in 2020 this is the freakin’ soundtrack of 2020.

The album overcomes a fairly strange pre-amble (it is Manson so what do you expect) to fall straight into “Red Black And Blue” which captures the traditional Manson sound so well. From there Manson goes into “We Are Chaos” – a track that captures the mood and emotions of 2020 in a way that no other track has. He repeats that formula with “Broken Needle” which also serves to be the perfect closer for a deeply emotional and moody album.

As an album We Are Chaos makes a lot of twists and turns. “Don’t Chase The Dead” is pure old school Manson while “Perfume” is a creative despite its catchiness. “Keep My Head Together” captures more of an alternative rock vibe while the thought provoking “Infinite Darkness” has you seriously thinking about the line ‘you are dead longer than you are alive.’

There are some truly amazing tracks on the album as well though. “Paint You With My Love” sees Manson push his vocal boundaries and reach some amazing new heights and the beautiful instrumental sounds on “Half-Way One Step Forward” conjure up sounds normally only heard on folk metal albums. Then there is “Solve Coagula” which is clearly the best track on the album. Moody, blues like guitar mixed with Manson doing what he does best and capturing the inner thoughts of the disenchanted. ‘I’m not special, I’m just broken and don’t want to be fixed’ may well be some of the best written lyrics of this year.

Somebody had to step up and capture 2020 on an album and turns out that person was Marilyn Manson. Twenty-five years into his career and Manson once again shows why he deserves to be mentioned alongside artists like David Bowie and Iggy Pop for his creativity and the ability to capture the mood of his fans.