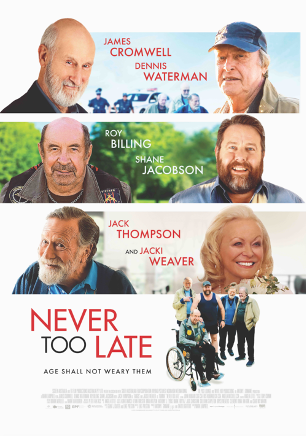 R&R Films is delighted to announce that the cinema release of the laugh out loud comedy NEVER TOO LATE has been rescheduled for October 29.

With enthusiastic cinema support, the film will open on approximately 150 screens nationally.

In the film, when a nursing home stands in the way of a 50-year courtship, four grumpy old Vietnam Vets unite to re-enact the great escape. They may have lost their memory and speed, but these renegades prove it’s never too late for new adventures, even if you have to break rules to break free.

Cinema goers will love the shenanigans of these four vets, one of their long-lost loves and an estranged son – played by the stellar cast of Jacki Weaver, Jack Thompson, Shane Jacobson, James Cromwell, Dennis Waterman, Roy Billing and Max Cullen.

Filmed on location in Adelaide, Never Too Late was directed by Mark Lamprell (My Mother Frank, A Few Less Men), was written by screenwriter and crime novelist Luke Preston and produced by Antony I Ginnane (Patrick, Turkey Shoot) and David Lightfoot (Wolf Creek).
The film will be released in Australia by Richard Becker and Robert Slaviero from R&R Films.

“Never Too Late is a charmer and we are confident audiences will love the antics of our heroes and the warmth of the late-in-life love story played so delightfully by our fabulous cast,” Richard and Robert said.