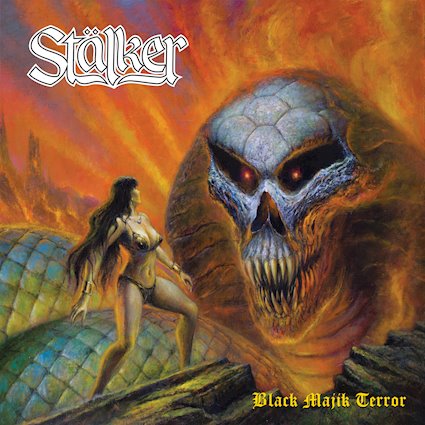 One of the complaints I hear over and over again about the heavy music scene at the moment is “everyone is making music that sounds like what everyone else is already doing.” Well if that is your beef time to flush out those cobwebs with the new album from Kiwi band Stalker.

Stalker is a band with a sound so unique I am convinced that no one has even produced this sound before… and nobody ever will in the future. Yes it is extremely unique and I love it.

There are certainly no second album blues for Stalker with their latest offering Black Majik Terror. Opening with a scream that any 1980s glam metal band would be proud of the opening track tells you everything you need to know about the band’s style and sound – it is a raw mix of glam screams and harder fast-paced metal that wins you over within seconds.

Showing a lot of growth since there last releases Stalker show throughout the album that they are always willing to try something new. Title track, “Black Majik Terror” opens with some good old fashioned Sunday organ playing before unleashing a brutal and to the point sound that reveals them to be one of those bands that you are going to want to tell your mates about.

What comes through loud and clear on this album though is the musicianship on the album. Daif’s vocals might be something like you have never heard before but also rearing its head this time around is the stunning guitar playing of Chris. Yes, this dude is one of the finest guitar players in the heavy music scene and this is the album where that is revealed for all to hear. Take one listen to “Iron Genocide” and you’ll see that he is a definite guitar maestro who has created some of the finest riffs in modern day metal.

The highlights on this album though are “Holocene’s End” and “The Cross.” The former is like a descent into madness armed with devil like cries from Daif and the result is a track that certainly hints at a much darker side to Stalker. Then there is “The Cross” a track with a long instrumental opening that strongly reflects a prog sound before exploding into life with amazing Stalker sheer brutality.

Lots of people use the term ‘next big thing.’ Black Majik Terror does more than that for Stalker though. This is the album that is going to expose them to a legion of new fans and have the whole heavy music world talking. Sensational instrumental work and a lead vocalist with a style nobody can emulate Stalker are the band that everybody needs to know about.