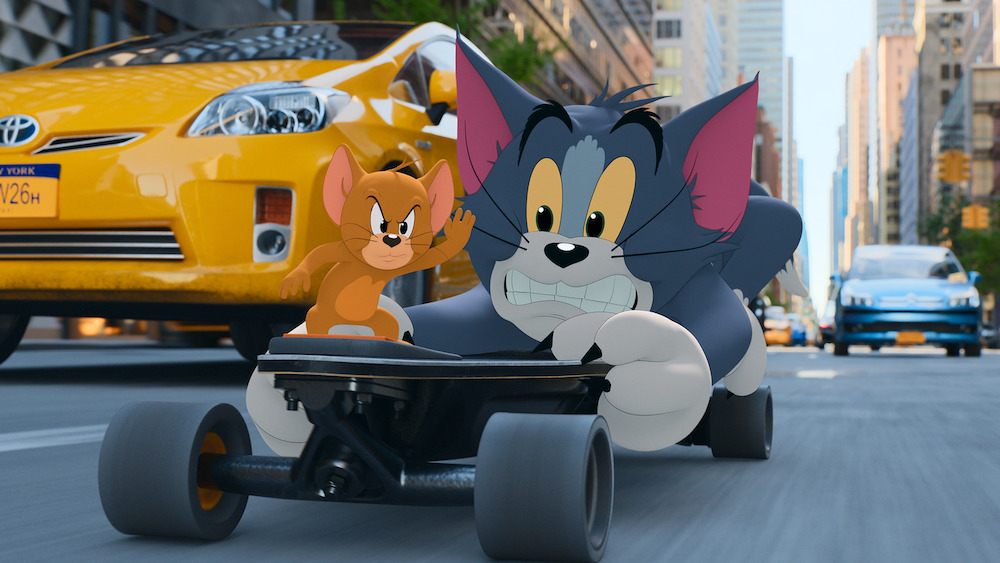 Summary:  A chaotic battle ensues between Jerry Mouse, who has taken refuge in the Royal Gate Hotel, and Tom Cat, who is hired to drive him away before the day of a big wedding arrives.

OUR TOM AND JERRY REVIEWS

When I first heard that a new Tom & Jerry movie was on the way, my first thought was – how could this possibly work? Yes the mischievous mouse and cat have been entertaining audiences for over 70 years, but I have come to realise over recent years that what the new generation finds funny compared to what I found funny as a child 30 years ago is vastly different. So, I’ll be completely honest – I thought the chances of this being a Tom & Jerry film that would appeal to all ages was next to zero.

But I am happy to say that I am going to have to eat my words with this one because director/screenwriter Tim Story (Fantastic Four) has created a world for Tom and Jerry that I am sure even their creators, William Hanna and Joseph Barbera would be very proud of.

The key thing to making Story’s version of Tom & Jerry work is that he has made it universal and timeless. As usual Tom chases Jerry right around the city and Jerry finds himself moving into the Royal Gate Hotel just as the world’s most popular couple, Preeta (Pallavi Sharada – Lion) and Ben (Colin Jost – How To Be Single), have arrived at the Hotel in preparation for their wedding.

The approaching wedding has the Hotel’s Events Manager, Terence (Michael Pena – Ant-Man), completely stressed out and he not impressed when his boss, Mr Dubros (Rob Delaney – Deadpool 2), hires the very inexperienced Kayla (Chloe Grace Moretz – Kick-Ass) to help him out.

Adding to Terence’s stress is the fact that suddenly he has the crazy pair of Tom and Jerry running around the hotel and fighting at every opportunity, just when he wants everything to be perfect. Despite him predicting it will end in disaster he can only sit back and watch as Kayla drums up a plan to hire Tom to try and capture Jerry.

There is a tonne of fun and comedy throughout the film but what impressed me the most was how Tim Story managed to mix old with new. The old school animation that brings Tom, Jerry and a cast of other animals including the famous bulldog Spike (Bobby Cannavale – Blue Jasmine), to life is mixed well with the modern day shots – so well in fact that the only film I think I ever seen that has such a seamless animation and real life mix is Who Framed Roger Rabbit?

Likewise the story itself. This is a timeless tale, the events that happen at the Hotel could easily have happened in the 1930s and that is one of the reasons why the characters of Tom and Jerry slip so well into this ‘new world’. Even the hotel itself looks like it has been plucked from a 1930s film noir flick so again lends itself to the world of Tom and Jerry perfectly.

As a storyteller Story also comes to the fore with his characters. Dubros and Terence are perfectly over-acted and enhanced while the smart Kayla is written as a strong and caring lead that the audience quickly wants to support. Story has even written Preeta and Ben in such a way that they are likable, move the story along but never over-stay their welcome or over-shadow the characters that are the centre-piece to the plot. The only character I feel Story should have done more with was Chef Jackie who is seriously under-used especially given that he has played by comedic genius Ken Jeong (Community) but still does very little to move the story along.

That is the only blemish though when it comes to the acting. Moretz quickly shows the audience that she can add comedy to the list of things that she excels while Pena again does what he did in Dora The Explorer and brings his A-Game to a family film. It probably doesn’t look like it on paper but Moretz and Pena are the perfect comedy duo here are one of the reasons why the film works so well.

Tom & Jerry goes very close to being the perfect family film – funny throughout and sensitive when it needs to be this is the kind of film that will be loved by any generation of the family. For kids it is something new and fresh and for Mum and Dad (and even Grandpa and Grandma) this is a trip down memory lane with a modern twist. I still can’t believe I am saying this but you will find very few films as enjoyable as Tom & Jerry this year.

Other Subculture Tom And Jerry Reviews: